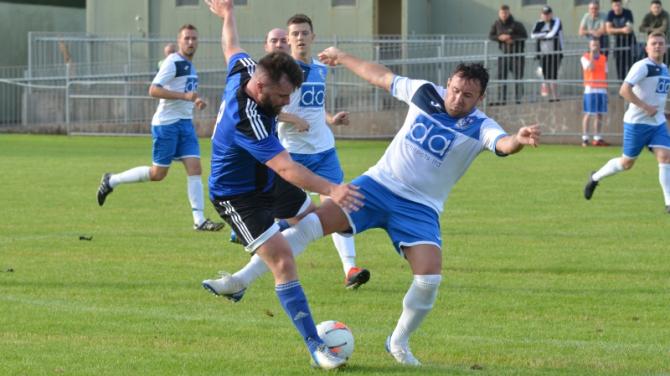 THIS was a game between the experience of the Blues against the youth of City.

The Blues started the game brighly and had a goal correctly disallowed as early as the second minute when Andrews was seemed to have been in an offside position and interfering with play.

However the pressure paid off a minute later when Ricky Dobbs made the most of a defensive mix up to tap in the opening goal to make to 1-0.

In the 39th minute a cross from Gareth Dobbs from the left was flicked in by Simon Andrews from close range to make it 2-0.

The goal of the game came just before the interval when after a poor City clearance, the ball arrived at the feet of Lee Wells who dispatched it from just inside his opponent’s half to fire the ball over the head of the City keeper and into the back of the net to leave the halftime score 3-0 to the Blues.

The second period was more of the same with the young City side being pressurised into making further errors and the Blues capitalised again in minute 64 when the ball was gifted to Andrews who run through on goal to calmly slot the ball past the advancing keeper to make it 4-0.

Wells continued to dominate the midfield area and capped off a fine display when he grabbed his second of the night 15 minutes from the end by chipping the ball from the edge of the penalty area into the top corner of the City goal to leave the final score of 5-0 to Armagh Blues.

Blues will meet United LT in the Quarter Final.