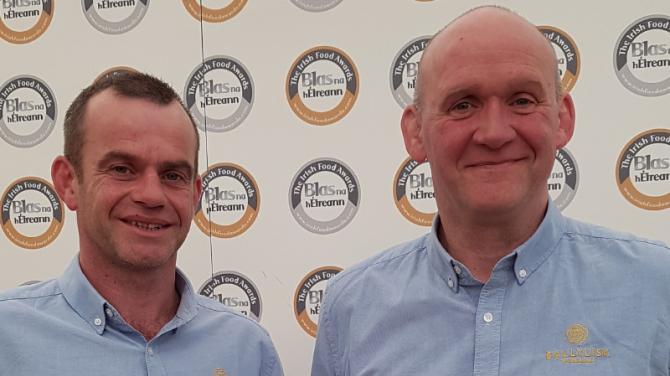 A CHEESE made by two brothers on their Tandragee farm has enjoyed  triple success at the Blas na hEireann Irish Food Awards in Dingle, Co Kerry.

Ballylisk of Armagh’s Triple Rose cheese won a silver award and also picked up Best in County and Best in Farmers’ Market.

The white-mould, single herd, triple cream cheese is made by Dean and Mark Wright.

The Wright brothers use the milk from their pedigree herd on the family farm at Ballylisk, where their family has been farming for five generations.

They are the only artisan cheesemakers in Northern Ireland with their own milk pool.

The cheese went into commercial production in April and is already the top-selling cheese at London’s Borough Market.

It is stocked in delis and farm shops across Northern Ireland and is on the table at many top restaurants including Novelli at City Quays, Belfast and the Catalina Restaurant at Lough Erne Resort.  It has also reached hotels and a supermarket chain in Portugal.

“We are over the moon with these awards. It is fantastic to get the recognition for all the hard work that goes into making the cheese,” said Dean.

“Our ancestors are part of our story. They have tilled the soil and helped to develop the farm into the place where the cows are eating the crops and producing the milk. We have complete traceability over what we do and that will always be the Ballylisk way,” said Mark.

Another cheese washed in Armagh cider has just been launched and a blue version of the Triple Rose is being trialled.