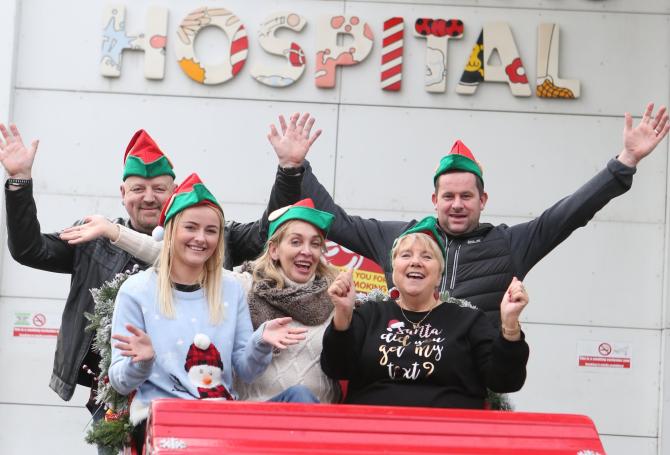 CHRISTMAS came early this year for children at the Royal Belfast Hospital for Sick Children after an Armagh National Lottery winner arrived with Santa and his reindeer to kick the festive season off with a bang.
Ross Hearst along with fellow lottery winners, Mary Hamilton (Belfast), Anne Canavan (Derry), Stephen Inglis (Bangor) and Lauren McLarnon (Newtownabbey) - who have won a staggering £18 million between them in the past four years – surprised the children when they arrived at the hospital in Belfast with Santa Claus in a sleigh pulled by a real-life reindeer.

Santa and his Lottery-winning ‘elves’ hosted a massive afternoon party for the children who, as well as meeting Santa and his reindeer in the flesh, learned to make their own Christmas decorations, and enjoyed a magic show as part of the special Christmas fun day.
“It has been such a brilliant day and I’m delighted to have been a part of it,” said Mary Hamilton from Belfast, who won £12.9 million on EuroMillions in November 2014. “The Royal Belfast Hospital for Sick Children provides such an important service in Northern Ireland and it’s been a real privilege to be here today for the children and see how happy the Christmas festivities have made them. I think I speak for myself and all the National Lottery winners here today when I say it’s been very rewarding.”

Inventor Anne Canavan from Derry~Londonderry, who won £1 million and a luxury holiday in September 2015 on EuroMillions, said: “It’s been a really special day here at the Royal Belfast Hospital for Sick Children. Myself and the rest of Santa’s Elves had a fantastic time helping out and we’ve been so pleased to bring some extra Christmas cheer to all the children”.

Stephen Inglis, a Bangor binman who shared a £70,000 National Lottery Scratchcard win with his work colleague Frank McCormick in August 2016, added: “we’ve all had an absolute ball visiting the children today and seeing their reactions as Santa and the reindeer arrived – it’s been amazing.”
“At the end of the day, it’s all about the children and bringing some extra fun and excitement to them during this special time of year. I really hope that they all had a great time and enjoyed it!”, he added.
The Royal Belfast Hospital for Sick Children is the only hospital in Northern Ireland that is dedicated specifically to caring for children and provides a crucial service to thousands across the province each year.

Play Development Coordinator Jenne McDonald said: “It’s been lots of fun having the lottery winners here today with Santa, his reindeer, and everyone else that made the day so special.
“All of the children really enjoyed themselves and we would like to say a big thank you to everyone who helped make the day a reality,” added Jenne.
To find out more about the Royal Belfast Hospital for Sick Children and the work they do visit http://www.belfasttrust.hscni.net/hospitals/ChildrensHospital.htm.