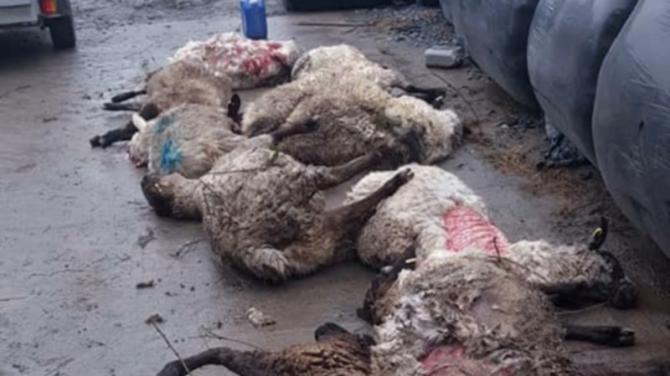 A KEADY farmer has been left devastated after his flock of sheep were almost wiped out by dogs in a frenzied attack.

Three dogs – a husky-type and two Alsatians - are believed to have been responsible in the sheep worrying episode on the Madden Road, which left nine sheep dead in the field, with a further three having to be destroyed by a vet.

Farmer Alan Faloon – who has been keeping sheep for over a decade – had been taking his children to school when he was alerted to events in his field on the morning of Monday, December 10.

“They were due to lamb at the end of January or start of February, so it is a tarra you have them so close to lambing and for this to happen at the last.

“It just all seemed to happen so quickly,” explained Mr Faloon, who added: “I was heading to school with the children and they actually witnessed it all as well.

“One of the dogs had a lamb up against the wire and by the time I had got the children to the bus stop and come back, the dogs were away, but I went and got the gun and went back.

“When I went back they were further down the field in the sheugh eating away at another sheep. I was on the quad and when they saw me coming they took off.”

Mr Faloon fired two shots from a rifle and while he thought he may have injured one, the dogs made off from the field.

“I just hope they don’t come back, but from now on if there are dogs on my property, I will be shooting them,” he warned.

Armagh vet Conor Donnelly, a director of Orchard Veterinary Centre described the sheep worrying as the worst case he has witnessed during his 20 years in the profession.

“I was called out on Tuesday to assess the remaining flock and three were limping quite badly and on examination had quite bad tears on their back legs so I had to put those other three sheep to sleep so that was 12 killed by the dogs.

“The sheep had been very badly mauled as the dogs really run amok in these cases and attack as many sheep as they can. It is a frenzied attack with a lot of soft tissue damage and trauma.

“Sheep that are chased or worried can end up dying even if they are not eaten as the whole stress sets them back and puts their immune system under great stress.”

Mr Donnelly has urged all dog owners to be aware of what dogs can do if left to roam and warned that farmers are within their rights to shoot any animal on their property, with owners also liable for veterinary bills if damage is caused.

Newry and Armagh DUP Assembly Member William Irwin said it was vital that dog owners fully understood the dangers of allowing dogs to roam freely in areas where sheep are grazing.

“It is absolutely essential that dog owners know where their dogs are at all times and exercise great care in order to stop this type of incident occurring as it represents a significant loss to the farmer who to has to deal with the aftermath,” Mr Irwin said.

“It is also worth noting that a farmer is well within their rights to shoot any dog that is worrying sheep on their land,” he added.

Meanwhile, the Ulster Farmers’ Union Deputy President Victor Chestnutt said despite the UFU and DAERA having embarked upon an increased awareness campaign to highlight the importance of responsible dog ownership in the countryside, dogs have yet again attacked, resulting in the deaths of 12 sheep, with a further 10 in lamb ewes left traumatised.

“Unfortunately the possibility that they may now abort their lambs is a very sad reality,” Mr Chestnutt said.

“It is a harrowing sight to see poor defenceless animals such as sheep fall victim to dog(s) and I again appeal to all dog owners to ensure that their pet(s) are kept under control at all times when near livestock. This also includes taking the necessary steps to prevent a dog(s) escaping from their home.”

“Dog owners need to remember that if their pet does engage in a livestock worrying incident causing harm they also tamper with a rural family’s livelihood. I would encourage all farmers to ensure that any such attacks are reported to the relevant authorities,” added Mr Chestnutt.