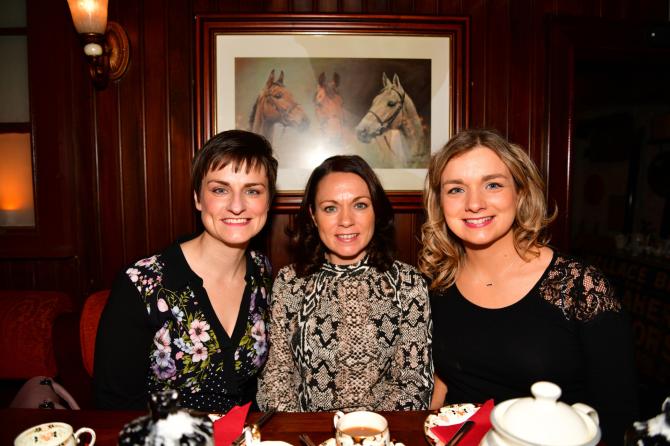 IT was a full house in Basil Shiels’ in Tassagh recently as scores of local ladies joined Friends of Sliabh Fuait and Naíscoil an Chéide to resurrect the celebration of Nollaig na mBan or Women’s Christmas.
Nollaig na mBan was traditionally a time when the womenfolk got together and took a well-earned break after the Christmas period. The custom survived in Counties Cork and Kerry but has recently seen a revival in other parts of Ireland with various events being organised with a focus on women, their achievements and their positive health and well being.
One of the organisers, Bróna Haughey, Chairperson of Friends of Sliabh Fuait and Secretary of Naíscoil an Chéide, hailed the event a fantastic success.

“We are overwhelmed at the response to resurrecting the old tradition of Nollaig na mBan here in the Sliabh Fuait area. Such was the popularity of the event, that we were unfortunately unable to cater for everyone who wished to
attend.
“Mothers, grandmothers, daughters, aunts and nieces were treated to a wonderful afternoon tea which extended well into the evening for some. It was fantastic to see so many local ladies meet up, chat over an array of sandwiches and sweets in a nice relaxed atmosphere.”
While the event brought local women together to socialise, there was a clear focus on health and well-being.
Bróna Haughey introduced Jacqueline Connolly to those in attendance. Jacqueline is a Community Development Worker with Armagh & Dungannon Promoting Wellbeing Team who spoke about living in the moment, mindfulness and the 5 Steps of self care to help you feel good.

The event also recognised local women who have been successful in their lives in various ways.
Entertainment was provided by the wonderful Sinéad Smyth Murphy who wowed the crowd with a number of songs and ballads especially ‘Clohinne Winds’ which was very apt for the occasion. Even the raffle celebrated local, successful business women in the area who focus on self care and well being as they had vouchers for spas, reflexology treatments, beauticians to name a few.

Organisers would like to thank prize sponsors: KW Mind, Body and Sole, The White Orchid, Niamh’s Beautique, Matildabelle Make-up, Jagit Edge, Hi-Maintenance, Dandelion Blue, Angel Holistics, 77th and Broadway
“Our sincere thanks to all the ladies who came along to support both Friends of Sliabh Fuait and Naíscoil an Chéide,” said Brona.

“It was a wonderful day so much so that we have already been asked by so many to make it an annual event, which we will. We wish all local ladies a happy Nollaig na mBan and, until next year, take care of yourselves and each other.”