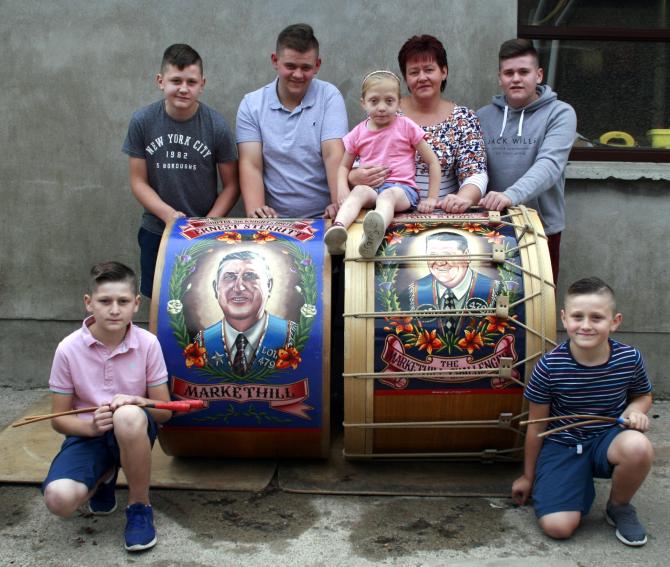 Kelley Sterritt pictured with her family

A Judge has requested mediation after an appeal was heard over a council noise abatement notice aimed at restricting the times Lambeg drums can be played at a Markethill home.

At Armagh Magistrates Court today (Tuesday) Judge Peter King referred both sides in the dispute for mediation in the hope that a resolution can be found.

He also said if a resolution could not be found then he would make a ruling on the matter. The case has been listed for a court update on Tuesday February 19.

At this stage it is unclear who will be paying for the mediation to take place.

In August environmental health officials from Armagh City Banbridge and Craigavon Borough Council served the notice on widowed mother-of-six, Kelley Sterritt after a complaint had been lodged by her neighbour Kenneth Hartley.

The notice restricted the playing of Lambeg drums at the Sterritt home at Forest View to just one hour per week. The council also set the days and times when it would be acceptable for the drums to be played.

At the time Mrs Sterritt said she would be appealing the order which she described as an attack on her culture and an attack on her family as the Sterritt family has been playing Lambeg drums at this address for over 60 years.

At an earlier court hearing District Judge Paul Copeland urged both sides in the dispute to try and find a compromise however a resolution could not be found and the appeal hearing went ahead on Friday January 18 at Armagh Magistrates Court in front of Judge Peter King.

It was thought at today's (Tuesday) hearing Judge King would either rule in favour of Mrs Sterritt or uphold the order or vary the terms of it. However he instead requested that both sides should undergo mediation.

In her evidence to the court on January 18 Mrs Sterritt acknowledged that the drums were loud but said her family had never received a complaint in the past from any of her neighbours.

Mr Hartley stressed to the court that the noise from the Sterritt Lambeg drums were having a negative impact on his family’s life. He also revealed his fear that the Sterritt family could develop a ‘super drum’ which could be capable of reaching 200 decibels and causing ‘instantaneous deafness’.