This one's for you dad 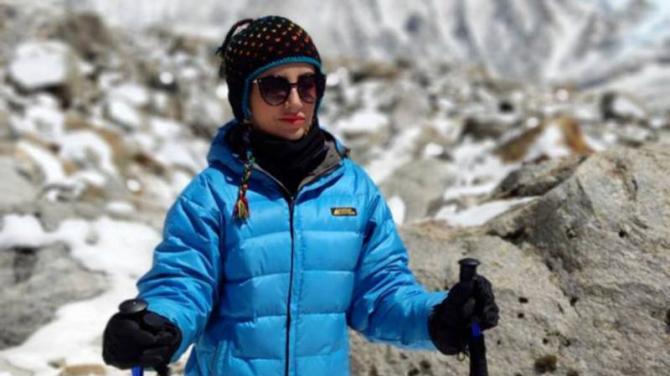 A MARKETHILL woman has marked the one-year anniversary of the day her family’s life changed forever by hiking to the Mount Everest base camp.

Frances Carlisle undertook the gruelling 10-day hike to raise funds for the ICU at the Royal Victoria Hospital in Belfast, the hospital she credits for saving her dad’s life after catastrophic injury at work, and Brain Injury Australia

She took on the mammoth challenge for REVIVE which supports the work of the Regional Intensive Care Unit and High Dependency Unit in the Royal Victoria Hospital. The money raised by REVIVE is used to purchase equipment, improve facilities and services for patients and their families and support research and development projects

Brain Injury Australia  will also benefit from Frances’ expedition. Funds raised will help support others through difficult times, assist in the funding of research and recovery and make a difference to to patients and families.

On March 21, 2018 Frances Carlisle’s father Francis suffered a serious injury at work when a large amount of steel fell onto his head from a height. He was knocked unconscious and remained undiscovered for two hours.

With his life hanging in the balance Francis was rushed into emergency surgery at the Royal Victoria Hospital where a significant amount of his skull was removed to release pressure from his brain. His left eye and side of his face were distorted from the impact of the steel and medical staff explained that the then 69 year-old was at high risk of further infection.

His daughter Frances, who has been living in Sydney Australia for over 14 years where she works for the Commonwealth Bank of Australia  as a Deputy Area Manager, flew home to be at her father’s side after receiving a call from her brother with the heartbreaking news.

“I spent 31 days in the ICU with my daddy and a further 10 days in HDU,” said Frances. “I spent every day with my father, I spoke of the good times, the memories we shared and the future we were looking forward to having.

“I was very fortunate to have my close friend live close to the hospital and she supported me in somewhere to stay and with things I needed to do to help my daddy and also my mum.

“I prayed every day for his recovery and watched him make little improvements and changes.”

Francis was moved to Craigavon Area Hospital where he faced a further four months of rehabilitation and ongoing assessments and testing.

However there was to be more devastating news for the Carlisle family when doctors revealed that Francis was not capable of returning home due to the extent of his brain injuries and would need constant support in a care home.

“The six-month period and transition for my father when he was moved to a permanent home has been a real life check-in for me,” said Frances. “The feelings, the pain and suffering for a small family and being the key source of support was something I never would want anyone to suffer.”

Francis was determined to to raise funds for the hospital which saved her father’s life and decided to take on the mammoth challenge of hiking to the Mount Everest Base Camp on the first anniversary of his accident.

“For anyone who doesn’t know me I have never trekked or climbed before,” she said.

“I love to keep fit and enjoy the gym but since deciding to complete this journey for Revive - The Royal Intensive Care Unit Belfast and Brain Injury Australia I took my training to another level.

“Starting December 2018 I committed to training twice a day until I travelled to Nepal.

“My 4.30am daily starts to complete cardio training before work and my evening session for strength and endurance after work definitely assisted in my successful climb. What a rollercoaster

“My journey to trek to Everest Base Camp and that one point further to Kala Patthar began on March 21st the one year anniversary of daddy’s accident.

“I flew in a propellor plane from Kathmandu to Lukla Airport. Lukla Airport is the most dangerous airport in the world. from there I spent ten days trekking.

“Some days throughout my trek were really tough, the negative temperatures, the steep rock climbs, the fear of crossing frozen valleys, meeting wild animals and also the one fear I held in crossing suspension bridges.

“I slept in wooden huts and tents, the huts had raised beds 8x4 sheets of plywood and the tents foam mattresses to reduce the risk of hypothermia or pneumonia.

“Temperatures dropped to as low as -18 at night and daily up to 10 degrees only.

“The huts I slept in had no electric or heating and often through the night I would wake with the noise on rodents. It was difficult to sleep in the cold, averaging four hours sleep each night.

“In each tea house were I ate daily there was no running water. My diet and nutrition suffered a lot as none of the food is fresh, all produce in Everest is carried via donkey or yak up the mountain.

“The overall experience has been life changing.

“I couldn’t have done it without the support of my friends, family and each person who has reached out to wish me every success.”

You can support Frances by donating via her Just Giving page. Go to https://www.justgiving.com/fundraising/frances-carlisle1