Plaque to be erected on Slieve Donard in memory of Gary 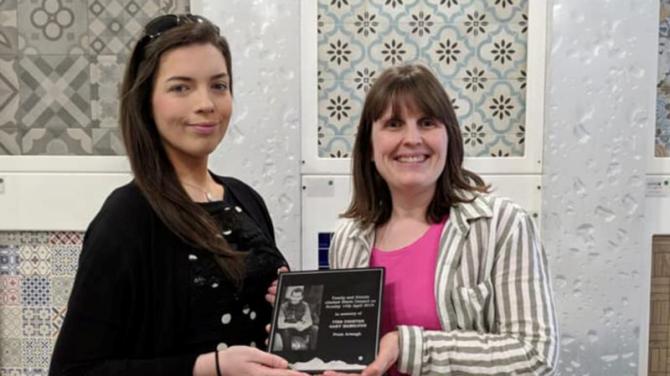 FAMILY and friends of an Armagh fire fighter who died in a RTC last July are in the final stages of preparation for a charity walk in his memory.

Gary Hamilton died when the Yamaha motorbike he was riding was involved in a collision a short distance outside Banbridge on the Castlewellan Road.

The popular 27 year-old from Drumcairn Manor in the city was a Whole Time fire fighter in Portadown and Retained in Armagh. His death came as a great shock to his colleagues in the Fire Service and indeed the wider Armagh community

Now Gary’s family, friends and colleagues will climb Northern Ireland’s highest peak, Slieve Donard on Sunday and when at the top they plan to erect a plaque in his honour.

The plaque was designed and produced by Armagh company, Armatile and presented to the Hamilton family ahead of Sunday’s climb.

As a mark of just how popular Gary was with his colleagues in the Fire service, personnel from Armagh, Portadown, Keady, Newry, controls and officers will be in attendance.

So far £2600 raised has been raised for the nominated charities but this doesn't include any sponsorship forms from climbers yet – there is still time to make a donation.

Gary was a third generation fireman, having followed his father Brian and grandfather Benny into the service.

Speaking after Gary’s death, Chief Fire & Rescue Officer, Gary Thompson described the Armagh man as a dedicated and popular colleague. “He joined NIFRS as a Retained Firefighter in June 2009 and joined the Wholetime Service in January 2013. His loss is deeply felt not only by his colleagues in Portadown and Armagh but by the entire Service.”

Speaking to the Gazette recently, Gary’s sister, Claire said:  “As most of you will know my brother Gary was killed in an RTC last July. He enjoyed his mountain walking and had climbed Slieve Donard on several occasions – he was especially proud of the time he climbed it in the snow.

“In memory of Gary we have organised a charity walk up Slieve Donard on April 14, 2019. “All money raised will go to the Air Ambulance Northern Ireland, The Fire Fighters Charity and Anam Cara (Supporting bereaved parents and siblings).

“It is great to see so many people signed up already, Gary was very popular and made an impact on everyone he met.

The Air Ambulance will be in attendance on Sunday and the Red Cross will be providing tea, coffee and snacks from their FEIS mobile all day.

Meanwhile Gary’s colleagues in the Fire Service are planning to raise funds for the three charities with a car wash in the Shambles Yard in May and a flag day in the city centre in June.