Stem cell campaign is launched in memory of much loved Gavin 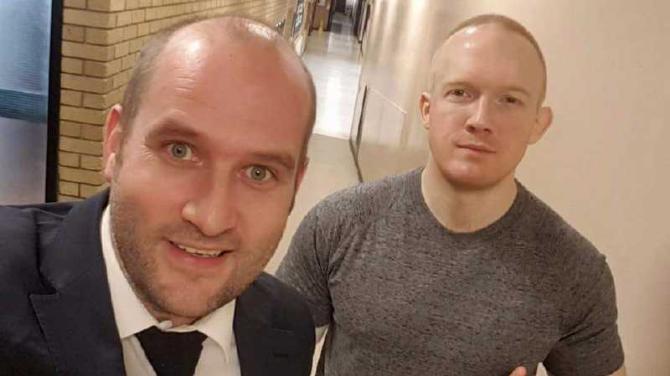 A FRIEND of a young Armagh man who passed away from leukaemia has launched a campaign to get as many people as possible to become stem cell donors.

The 37-year-old was a former teacher at Saint Catherine’s College in Armagh, where he had taught French and Spanish for three-and-a-half years, up until June 2014.

At the time of taking unwell, Gavin had been working as a teacher in Dubai, but sadly lost his courageous fight just nine months after being diagnosed.

During his treatment, he received stem cells from a donor – a complete stranger – and was forever grateful.

And now, Gavin’s lifelong friend Karl is hoping to keep his memory alive by raising awareness of the need for people to become stem cell donors.

On Saturday, May 25, he will be at Armagh City Hotel, between 9am and 1pm, to help anyone interested in registering for the worthy cause, which could potentially save a life.

“The immunity of all blood cancer sufferers is somewhat destroyed by chemotheraphy and radiotherapy which affects their immune cells and bodily tissues so they need people like us,” Karl told the Ulster Gazette.

“You register your intention and they will send out a swab kit and you swab the inside of your cheek and send it off.

“You are then put onto a world-wide database and if you are a match, you will be called into a local clinic to donate stem cells. You could be called in five years or five weeks or you may never be called.

“Blood is taken from one arm and passed through a filter which collects healthy stem cells. It is immediately returned to the donor through the other arm.

“The entire procedure is pain-free and one which most of us will never have heard of unless we know of somebody who has needed a stem cell transplant. A donor’s stem cells are completely replenished within two to four weeks and there are no side effects.

“My plan is to get out and about to hand out flyers and make people aware and to get as many people onto the register.

“Gavin and I were at school together at St Patrick’s Grammer in Armagh and we were in Coleraine together at university and we then ended up in Liverpool so we were friends for nearly 30 years.

“I’m absolutely devastated and I think of him every day. He was a cracking fella and a very witty fella.

“He was working over in Dubai and he fell unwell on holidays in India during a half term break and when he went to the doctor, he was diagnosed with Acute Lymphoblastic Leukaemia.

“He came home with the idea that he would be going back to Dubai, but unfortunately that didn’t happen and he passed away nine months later.

“I’m doing it in his name. We are not going to get Gavin back unfortunately, but if we can get the opportunity to prolong someone else’s life, that is good enough for me.

“People have been brilliant so far and have been offering their help to give out leaflets. I want to go to sporting events and have also been in touch with someone at Queen’s.

“It’s something you don’t know about until you are touched by it. Gavin had spoken to me about how amazing it was that a complete stranger had donated their stem cells and that theirs were a match for his. I suppose this is a thank you on his behalf.”

Since Gavin’s untimely death, Karl has been helping to raise the profile awareness of a disease which robbed his friend of his life.

“Last summer, I experienced generosity that I never experienced before. Hundreds of people ran with me during my ‘5k a day for Gavin’ campaign,” he explained.

“Just under £15,000 was raised for Leukaemia and Lymphoma NI. Strangers were handing me donations in towns and villages all over the north and I’m eternally grateful to each and every single person who was involved.

“Gavin was an incredible man who is sorely missed. He was an amazing friend who touched so many lives all over the world in his 37 years,” he added.

Anyone wishing to register, should visit www.dkms.org.uk (if you are aged between 18-55) or www.anthonynolan.org (if aged between 16-30).