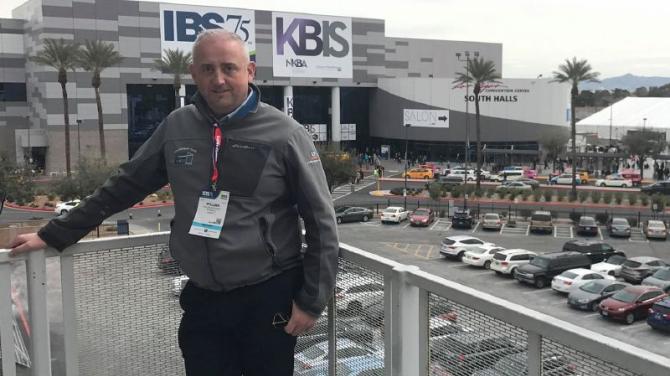 A MARKETHILL man has described America as a land of opportunity for young people looking to establish themselves in the building industry.

William Kilpatrick has embarked on a new venture in the United States with his company, Entekra which is making rapid progress to becoming a major player in the house building industry on the west coast of America.

The company is on course to open two more factories within the next 18 months which will take their capacity to 6000 units per year.

And William believes his company can offer a fantastic career path for young people in the building industry wanting to make the move to America.

“The standard of work by Irish people is very well received in the US,” said William.

“There are openings for most skilled people from builders, surveyors and architectural technologists to quantity surveyors and IT professionals. Our company also offers internships with onsite training facilities in our european headquarters in Monaghan – a year’s internship with us could open the door to a very successful career in America.”

William, a former Cladymore Primary and Markethill High School pupil has been in the industry his whole career but taking the plunge and moving to America was something that came out of the blue.

Married to Joanne with a young daughter, Molly, William now splits his time between the company’s California base and their European headquarters in Monaghan.

“From a very early age I was always interested in construction as my father was a carpenter and I would have been on jobs with him. So, you can say my path was more or less set from that stage,” he said.

“I acquired an interest in timber frame construction at a trade show in Belfast over 20 years ago. I then joined Century Homes, Monaghan as a design technologist achieving promotions, designing various types of buildings including homes, hotels and apartment complexes.

“During my tenure at Century Homes I was fortunate to have been able to design projects in numerous countries such as France, Cyprus, Romania and Japan.

“Century Homes was the largest off-site manufacturer of timber frame structures in Europe with five factories located throughout Ireland and the United Kingdom. In 2005 Century Homes was sold to Kingspan for €100m.

“In 2014 I was approached by my former CEO at Century Homes, Gerard McCaughey asking if I would be interested in a new venture in the United States as part of the Senior Management team.

“This venture was to bring the benefits of off-site construction to the US Market.

“Currently 95% of housing constructed in the US is done using timber – 90% of which is stick framed and 5% using panelized and other methods.

“As a whole on a 30 year average the US has to build 1.5m homes per annum. Currently the US is building 1.25m homes. With the low unemployment rate and the resistance from young Americans to enter the construction industry the US cannot build homes quickly enough to supply the demand therefore driving up prices.

“For every five people who leave/retire from the construction industry only one enters.

“In Europe we build timber frame structures, but never would we think of building these on the site. In Europe timber frames are manufactured in a controlled environment under factory conditions using the latest technology.

“The single biggest investment a person will ever make is their home. Imagine if you could buy your car cheaper get the parts delivered to your home and ask someone to build it for you. This is the same for housing in the US. Why would you invest so much money and have the home framed in the field which has no quality control, confirmed completion time or cost control?

“As a start-up company in 2016 we entered the US market. Our business plan at Entekra is to bring FIOSS (Fully Integrated off-site solution) to the US market place.

“With the use of CNC machinery and CAD software we are able to precision engineer the frames at our European Headquarters in Monaghan and manufacture the frames at our Manufacturing facility in Ripon Northern California.

“Just 18 months after delivering our first frame to Los Banos, California we now have orders in excess of 1800 homes. As the average size of a home in the US is 2.5 times that in the UK this would equate to 4500 homes in the UK.

“In May 2018 we received an investment of $45m from LP (Louisiana Pacific). October 2018 saw construction commence on our new 180K sq ft manufacturing facility in Modesto Northern California. This facility will boast the latest automated wall and floor production lines and include a wood processing center. By end of Q4 this factory will be fully functional and cable of producing 3000 homes per annum.

In May 2018 we were asked to by KB Homes to supply the show house for the IBS (International builders show) in Las Vegas. The IBS is the largest home builder show in the world.

“I was delighted to project manage this build. The home dubbed “where tomorrow lives” was manufactured under factory controlled conditions at our Ripon facility using Pre-fitted insulation LSL and framer series lumber. The external walls were sheathed in a ZIP frame board which included a waterproof membrane. Other partners on this project included Kingspan, Tesla and Google.”

Due to the high demand for homes in the US this offers unique opportunities for people back home to join an innovative team. Entekra is actively recruiting for Design Technicians and Engineering/truss panel designers. Please visit our website www.entekra.com/careers.