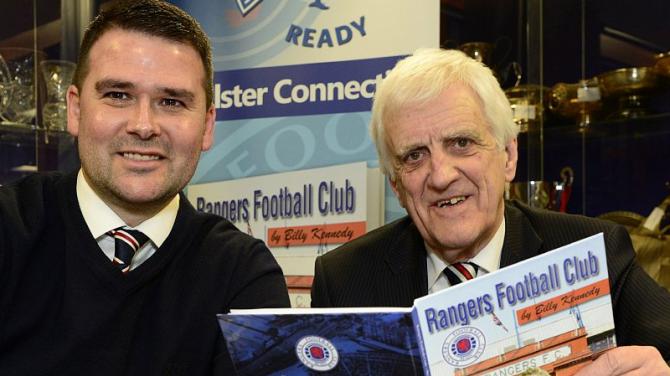 IT has been a four-year labour of love for Tandragee journalist and lifelong Glasgow Rangers fan, Billy Kennedy but on Friday his latest book hit the shelves.

Rangers Football Club - the Ulster Connection' is a book which will greatly interest and fascinate the many thousands of Rangers supporters across Northern Ireland.

It was launched on Friday at Windsor Park at an event which included former Rangers striker and current Linfield manager, David Healy.

The 132-page book is a detailed full colour miscellany on a unique Scots-Irish link that has provided a significant chapter in the proud and successful history of a Scottish institution - the Rangers Football Club, dating back to the club's inception in 1872.

Two of the club's founders, Moses and Peter McNeil, have an Ulster connection through the Co Down birth of their mother Jean Bain, who, after moving to Scotland for work in the mid-19th century, married a Scotsman John McNeil.

Nineteen players for this Ulster diaspora were Irish internationals and contributed much to the success of Rangers Football Club.

The Ulster connection at Ibrox Park has been tangible through the decades and currently there are four Northern Ireland internationals in the Rangers' squad - Steven Davis, Gareth McAuley, Kyle Lafferty, and Lee Hodson.

This book, with an rich array of colour and mono photographs, is a testimony and fitting tribute to momentous and memorable achievements by Ulstermen at Rangers Football Club, past and present.

Billy, who's been an official of Linfield Football Club for 45 years, has been a fan of Rangers since his childhood too.

He says: "I was a Linfield supporter first and foremost but started going to see Rangers at a time when they had household names like Jim Baxter and Willie Henderson in their line-ups."

And he remembers his early trips to Glasgow from around 1961 involved long overnight journeys on ships on the Burns & Laird line where there was always a race to get a top bunk to avoid ending up below fellow travellers with notoriously queasy stomachs.

"The vibrant shipyard industry in both Glasgow and Belfast, where the ill-fated Titanic was famously built, was an attraction for workers to travel across the North Channel for employment in the late 19th century and early 20th century."

Billy, who is originally from Bessbrook but now living in Tandragee, has dedicated his book to his late friend Billy Simpson, who played for Linfield as well as Rangers and who was transferred from Windsor Park to Ibrox in 1950 for a fee of £11,500.

A terrible tragedy figures in Kennedy's book. Sixty-six Rangers fans were killed in 1971 during a surge of supporters on an exit stairway at Ibrox after the Gers scored a last-minute equaliser against Celtic.

Kennedy, however, recalls that an unexpected seed of hope was planted in Northern Ireland by the disaster just as the Troubles were intensifying in the province.

He says: "I was the secretary of a Linfield supporters' club in the Newry area where a local Celtic supporters' club made contact and said they wanted to help raise money for the people who died at Ibrox."

The Celtic fans and the Linfield supporters raised £1,500 - the equivalent of £21,000 today - which they presented to the Lord Mayor of Belfast to hand over to the Lord Provost of Glasgow.