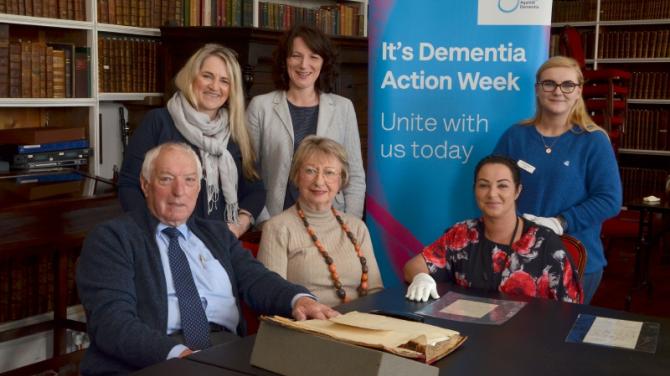 ARMAGH Robinson Library took part in this year’s Dementia Action Week by welcoming carers to the Library for a morning session with poet and playwright, Maria McManus.

Maria has contributed to the arts for more than twenty years, through arts in healthcare, music and literary activities, and has worked within the health service for many years. Part of her work focussed on adult mental health and the care of older people with dementia.

Kelly Meeke, Dementia Support Worker for the Alzheimer’s Society, has worked with the Library and No 5 Vicars’ Hill over the last two years, helping them to work to become a dementia friendly museum.

She encouraged the local carers’ group to support the Library in this venture and to help promote Dementia Action Week locally.

Maria McManus has also worked with the Library and No 5 before and, on this occasion, worked within Armagh City, Banbridge and Craigavon Borough Council’s funded project, ‘Splendid, Liberal, Lofty’,  which explores the legacy of Archbishop Richard Robinson, who founded the Library.

She worked with the carers to develop the theme of hand-writing through letter-writing, highlighting the importance of letters – personal letters, love letters, formal and informal letters. The Library’s Visitor Engagement Officer, Rachel Toner, showed examples of handwriting held in the Library’s own collection, including letters written by the author Jonathan Swift!

That is why this year’s theme for Dementia Action Week is to encourage people to talk with someone living with dementia. It can be difficult to know what to say, but there is advice to start a conversation.

The Library’s team will be keen to welcome those living with dementia and their carers well beyond this special week.