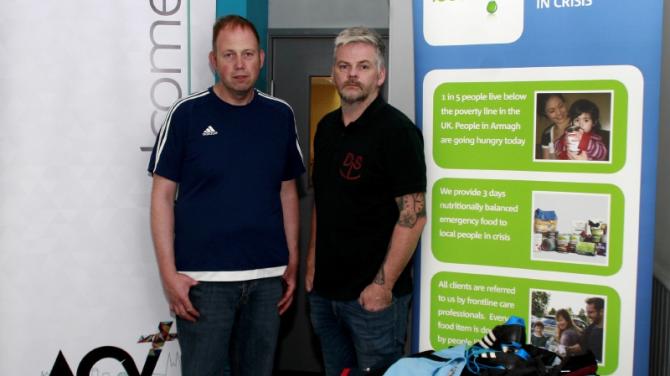 PARENTS struggling to make ends meet are being thrown a lifeline with the opening of a new store in Armagh offering free school uniforms.

This is the first year pre-loved school uniforms have been available at a pop up shop which opened yesterday (Monday).

Located at the new Armagh City Vineyard premises at 40, Scotch Street, it will remain open for five days until this Friday (June 28), to enable anyone in need of school uniforms to get kitted out.

The pop up shop is part of an initiative by Armagh Foodbank which is facilitated by Armagh Elim Church who have been working endlessly in the city over recent years to ensure everyone has food on their table.

Richard Thompson, project manager at Armagh Foodbank told the Ulster Gazette he is delighted at the response received to date.

“The Foodbank started to do school uniforms a couple of years ago,” Mr Thompson said.

“This year, we decided to try a pop up shop in Armagh City Vineyard as they have premises newly opened two weeks ago to provide compassionate  ministry within the city.

“We want people in need of uniforms to come and make use of what we have and we have had no problems getting donations.

“Getting people to come and use it has been a bit more difficult.

“As well as uniforms there is also shoes, coats and there’s a bit of PE stuff, as well as schoolbags.

“The response from people donating has been great.

“St Catherine’s did a collection and some of the mums took all the stuff home and washed it.

“Even some schools have donated items from their lost property.

Anyone with school uniforms they would like to donate to help others can drop them off at the Armagh City Vineyard shop or at the Armagh Foodbank at the Elim Church on Tuesdays and Saturdays between 10.30am and 12.30pm.

“Blazers would be the main thing as that is often the most expensive part of the school uniform,” he said.

“We have a fair bit of shirts and polo-tops available.

“We also have uniform available for all local primary schools.

“We will see how this year goes and take it from there and see how it materialises,” Mr Thompson added.

l The pop up shop opened yesterday (Monday) and will be open each day until Friday between 9am and 10am and from 2pm until 4pm.