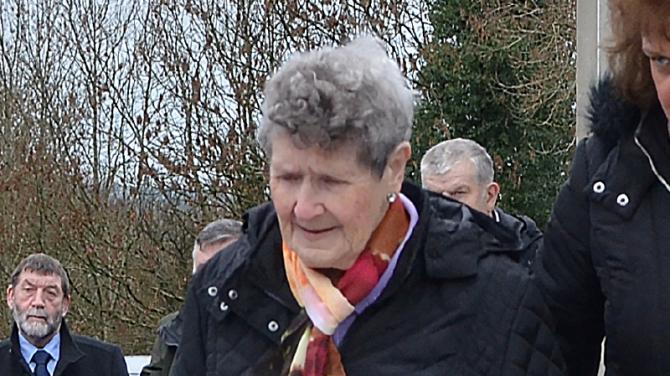 THE death has been announced of Mrs Bea Worton BEM.

Mrs Worton was the last surviving mother of the 10 civillians murdered by the IRA in the Kingsmills massacre.

She passed away peacefully on Friday aged 91.

Her, son, Kenneth, was one of 10 workmen murdered after they had been ordered out of their minibus as it travelled home from work in 1976.

She played a crucial role in securing a legacy inquest into the atrocity.

Her funeral will take place on Monday at 1.30pm in 1st Markethill Presbyterian Church (Upper) followed by interment in the adjoining Churchyard.

She was the wife of the late George and the mother of Jennifer, Jacqueline, Dennis, Colin and the late Kenneth.

Speaking on hearing the news, DUP MP Emma Little-Pengelly said she was “so sorry” to hear of her death.

She added that Mrs Worton was “an incredibly strong woman who fought tirelessly for justice for her son and other victims.

“Bea was the last surviving mother of the Kingsmill victims, an appalling act of sectarian violence by the IRA. The naming of a playpark (supported by Sinn Fein) after one of the men implicated in carrying out the atrocity was acutely hurtful and Bea sucessfully challanged the Council on the issue.

“It is an incredible tragedy that Bea has passed away without ever seeing justice for her 24 year old son. My thoughts and prayers are with her family and friends today, may God bless them with comfort at this difficult time.”

Independent Unionist councillor, Paul Berry, added, “It was with much sadness when I learned of the sad passing of Bea yesterday evening.

“Ever since her son Kenneth was brutally murdered in the Kingsmill Massacre she fought gracefully for Justice for him and his other work colleagues who were murdered and she never give up.

“May God comfort the family at this time of mourning and I have no doubt they will take on the mantle to continue to fight for justice.”

There will be more on this story in this week’s Ulster Gazette.