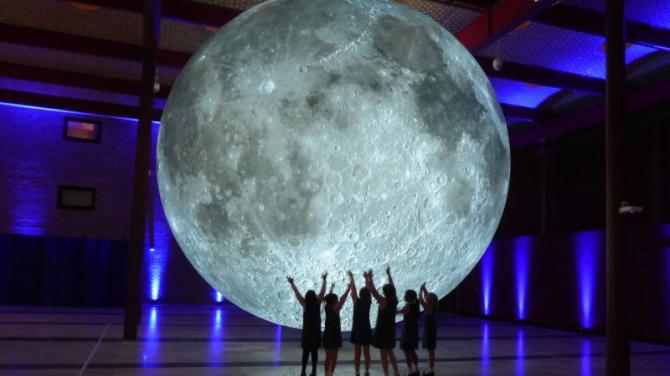 ARMAGH has joined an elite group of cities across the world to host artist Luke Jerram’s giant-sized spherical, internally lit lunar sculpture as part of a summer-long celebration to mark the historic Apollo moon landing exactly 50 years ago.

As part of its ‘One Giant Leap’ summer programme of events, Armagh Observatory and Planetarium, supported by the Department for Communities and Armagh City, Banbridge and Craigavon Borough Council, will host a special ‘Museum on the Mall’ special weekend festival event at the Mall on Saturday, July 20 and Sunday, July 21.

Seven metres in diameter, artist Luke Jerram’s stunning installation, which accurately features detailed imagery of the moon’s surface from Nasa – each centimetre of the artwork representing about 5km of the moon – has already featured in other locations across the other world, including Australia, India, France, Germany and the Netherlands.

To celebrate its arrival on the Mall, the two-day FREE event promises fun for all the family with live music and activities including moon-themed Jumping Clay workshops, Captain Wonder Caricatures, science workshops, face-painting, balloon modelling and more.

Leading a cast of award-winning musical talent, including Brian Kennedy and the 4 of Us will take to the stage over the weekend alongside popular artists Jon Chase, Music in the Glen Sam Wickens and Hunk Papa. Armagh’s very own Marty Rafferty Guitar School and young musicians from Comhaltas will also be proudly performing.

It’s almost 50 years since the Apollo II Moon landing made history as the first spaceflight to take humans to the surface of another world – landing astronauts Neil Armstrong and Buzz Aldrin on the Moon on July 20, 1969 – and a major programme of special events is already under way at Armagh Observatory and Planetarium.

Professor Michael Burton, Director of Armagh Observatory and Planetarium said, “We are delighted to bring the Museum of the Moon to Armagh exactly 50 years from the Apollo 11 Moon landing.

“This highly anticipated exhibition has featured in many cities across the globe such as London, Los Angeles, Melbourne, Barcelona, Hong Kong and now will feature in the beautiful City of Armagh as part of our ‘One Giant Leap’ summer programme to celebrate this outstanding milestone.

“Backed by an outstanding programme of events and a full weekend of festivities for everyone, we’re extremely proud to once again make Armagh the place for space in 2019.”

The jaw-dropping giant moon art installation will be on full display for everyone to see in the Mall and the jam-packed weekend programme will be hosted by well-known TV and radio presenter Siobhan McGarry.

For details on all events as part of the ‘One Giant Leap’ summer programme over July and August, visit www.armagh.space and on Facebook or Twitter for regular information updates.

This event is supported by the Department for Communities and Armagh City, Banbridge and Craigavon Borough Council.

The Armagh Observatory and Planetarium remains one of the UK and Ireland’s oldest and most respected operating planetariums and still delivers a globally recognised scientific research and educational programme.