Chloe rising to the challenge - 365 times over 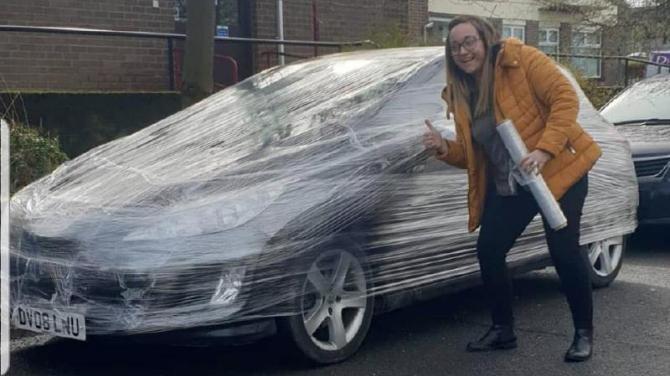 AN Armagh mother is more than half-way through a daunting year-long challenge to do 365 things she has never done before.

So, a fresh challenge to be undertaken and completed every day between January 1 and December 31. Not easy.

In addition to the difficulty of the task, the other challenge, of course, is to come up with enough fresh ideas to enable her to achieve that objective. And that is where 33-year-old mum of two, Chloe Clarke, is hoping Gazette readers can help her.

It’s all for a very good cause and one which is close to her heart, for the purpose of this unusual undertaking is to raise money for Epilepsy Action.

Northern Ireland is reckoned to have 20,000 epilepsy sufferers and Chloe’s decision to get involved followed her 10-year-old daughter Lilli’s diagnosis as having idiopathic generalised epilepsy, something which she described as being like the family “having had the rug pulled out from under our feet.”

“We certainly hadn’t been expecting that, because typically, we associated 'fits' and 'episodes' with someone having a seizure on the floor,” Chloe admitted.

“But Lilli doesn’t suffer from the stereotypical epilepsy; instead she has absent and myotonic seizures.

“Since diagnosis she has been prescribed medication which has now stopped these, but this has been through trial and error and that has made her very ill at times.

“It may be a childhood thing that she’ll grow out of, or she may have it for life. At this stage they can’t tell - only time will tell.

“So in the grand scheme of things, my having to come up with a fresh challenge for 365 days in a row is nothing when you consider what some people with epilepsy are living with every day.”

The challenges Chloe has completed to date have been documented each day on social media and they can be found on Instagram.Thus far they have included shrink wrapping a car, ringing church bells, milking cows, celebrating International Women’s Day by burning her bra, cycling on a a tandem and learning the alaphabet in sign language.

During the holiday which Chloe, husband Richard, Lilli and her younger sister Phoebe have just had in Barcelona, mum visted the La Liga champions’ famed 99,000-capacity Camp Nou home.

Now that’s a long way - in every sense - from Holm Park. But more importantly, it was another of her many first-time experiences since January 1.

Among some of the others in the pipeline in the near future are a Sunday, July 21 visit to the Open at Royal Portrush and a Wednesday, July 24 meeting with Lord Mayor Councillor Mealla Campbell.

“I’ve never been to any golf tournament before,” said Chloe, whose success in geeting a ticket for the final day of that forthcoming North Coast showpiece will be the envy of many of the thousands who were unable to get one.

“And I’ve never met a Lord Mayor, either,” she added.

“All of my challenges can be found using the hashtag #Ihavenever365challenge and I’d really welcome any further ideas - big or small - readers of the Gazette might have.

“I’m fairly game for most things as you can see from what I have been up to so far. I’m not easily embarrassed and I’m really not bothered at all about what people might think of me.

“Going through Dublin Airport when we were going on holiday, I made it look like I was swimming on the travelator. People going past were all looking at me, but I didn’t mond that in the slightest. This isn’t about how I look - it’s for something far more important to me than that.”

Apealing to the public to enter into the spirit of what she is doing, she stressed that she is up for most things.

“One woman phoned me and offered me the opportunity to shear a sheep,” Chloe revealed. “I just though, ‘Wow, that’s great’. Like I said, I’ll try most things.

“But it makes no sense if I have to pay to do them because that’s money which would do more if it was going to the charity. As much as anything it’s about trying to keep costs down as much as possible.

“So calls like that one offering me the chance to shear sheep are just what I need, because although I could pay to do a lot of these things, there really wouldn’t be much point to that, would there?”

Explaining her thinking behind this pareticular means of raising money in tandem with raising public awareness sher said, “I wanted to do something outside of the box.

“As I see it, if I can raise money to help with research for drugs, support those who have been diagnosed and help educate people on all the facts and symptoms, that will make all of this worthwhile.”

She has set up a Just Giving Page which can be found using the following hyperlink for anyone who wishes to make a donation - https://www.justgiving.com/fundraising/ihavenever365challenge