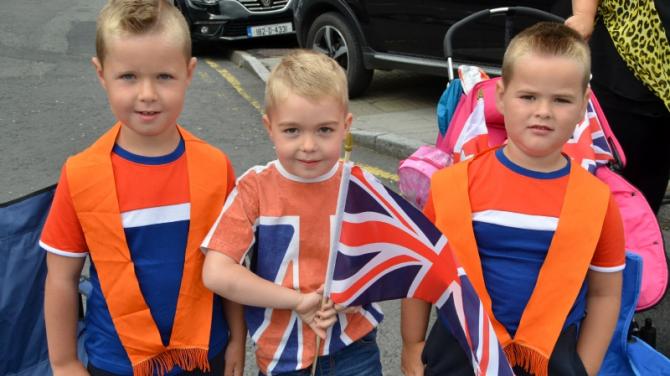 THE sunshine may not have been as bright as they would have liked but the Twelfth was nonetheless glorious in Tandragee.

Around 20,000 people crammed into the town to watch the 5,000 brethren across 11 district lodges and 65 bands take part in a colourful and noisy parade.

Festivities began early, at around 8.45am, with the host district holding their unique forming of 'The Ring' ceremony.

The main parade, led by Tandragee District and Maevemacullen Accordian Band, set off an hour later.

The parade wound its way through the town via Church Street, Market Street and Mill Street, to the demonstration field on the Scarva Road.

In the field the County Grand Master, Denis J. Watson, took the chair and proceedings commenced with the traditional religious service, conducted by Rev. Dr. Alan McCann, County Grand Chaplain. The address was given by Pastor Gordon Graham, Tandragee District Chaplain. Renowned mezzo-soprano, Emma Brown, led the praise and performed a solo during the proceedings.

The resolutions, which were read out in the field, called for “fair treatment and appropriate respect” for members of the security forces while “delighted” was expressed at the birth of a son to Prince Harry and Meghan, Duchess of Sussex earlier this year.

THE FAITH - As members of the Loyal Orange Institution of Ireland, we hold to the Holy Scriptures as the inspired, infallible and inerrant Word of God. We affirm its authority to be not dependent on any person or church; but resting entirely on God as the only rule of faith and practice.

We acknowledge it to be the whole counsel of God which contains all that is necessary for His glory and for a person’s life, faith and salvation. We believe that the Word of God clearly teaches that salvation is inspired by the Holy Spirit and is found only in the Lord Jesus Christ through His finished work on Calvary.

Scripture declares in Acts 4 v12: “Neither is there salvation in any other: for there is none other name under heaven given among men, whereby we must be saved”.

We lift high the name of Jesus, the only Mediator between God and sinners, and urge all men and women to read the Scriptures for themselves which alone are able to make them wise unto salvation.

LOYALTY - That we, the Orangemen assembled at Tandragee in commemoration of the 329th anniversary of the Battle of the Boyne do hereby reaffirm our devotion and loyalty to the Throne and Person of Her Most Gracious Majesty Queen Elizabeth II, Queen of the United Kingdom of Great Britain and Northern Ireland and Her other Realms, Defender of The Faith.

We give thanks for the wider Royal family and welcome their increasing public role and their visits to this part of the United Kingdom.

Furthermore, we express our delight in the birth of a son to Baron and Baroness Kilkeel in May of this year.

THE STATE - Following a year of political turmoil and uncertainty regarding Brexit, we reassert our commitment to the defence of the Union.

We remain resolutely opposed to any course of action which politically, economically or culturally undermines the current constitutional position of the United Kingdom of Great Britain and Northern Ireland.

As citizens, we recognise the need for accountable governance in Northern Ireland. A political settlement however should not facilitate the elevation or enshrinement of one cultural tradition over others.

As such, this Institution reaffirms our opposition to the introduction of any form of legislation for the Irish language and the wide-ranging powers which would flow from such a development.

We demand that fair treatment and appropriate respect be awarded to those members of the security forces who served in the midst of the relentless and ruthless terrorist campaign in Northern Ireland. The disproportionate scrutiny and persecution of those who served to protect wider society is clearly at odds with the leniency and effective amnesty provided to those terrorists responsible for the deaths of thousands - including 339 of our members.

The true history of those decades cannot be forgotten or re-written by modern day apologists for murder and mayhem.