New Rector takes over at Mullabrack and Kilcluney 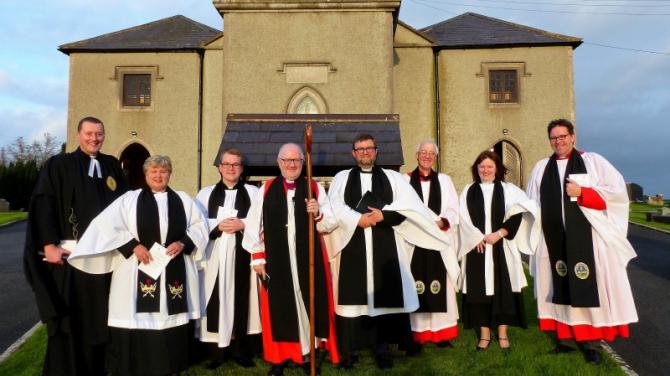 THE Church of Ireland Parishes of Mullabrack and Kilcluney have a new Rector.

He is 37-year-old Revd Dr Peter Munce who was instituted at a special service in St John’s Church, Mullabrack, on Wednesday night, September 4.

She knows Dr Munce particularly well, for in August 2016 he was ordained presbyter for the curacy of Moira in the Diocese of Down and Dromore and that is the role in which he continued to serve up until taking up this new post as Rector of Mullabrack and Kilcluney.

Dr Munce and his wife Celia have three children, aged nine, six and three, and in addition to spending time with the family, he lists going for walks and watching family movies as hobbies. He also enjoys reading and playing golf – a game he describes as being both “wonderful and frustrating.” Golfers throughout the Diocese of Armagh will say ‘Amen’ to his assessment!

In addition, he is particularly fond of Chinese take–away meals – a passion he shares with Revd William Orr, Rector of nearby St Mark’s, Portadown, who also enjoys the occasional round of golf and agrees that it can be very frustrating!

With mid-Armagh having been named in last week’s edition of The Gazette as an area where many people have had debt problems, Dr Munce’s involvement with CAP (Christians Against Poverty) during his time in the United Parish of Ballymoney, Finvoy and Rasharkin, County Antrim, where he worked prior to taking up his post in Moira, will be particularly welcome news.

With CAP’s ministry hereabouts being shared by Richhill Presbyterian Church and Portadown Baptist Church, members of both those denominations will be pleased to learn that their Church of Ireland neighbour, the new Rector of the nearby Parishes of Mullabrack and Kilcluney, is a kindred spirit

And they will be encouraged that in expressing a desire to reach out to those in need, Dr Munce also cited a desire “for greater local co-operation between various denominations to advance the Kingdom of God.”

Dr Munce succeeds Revd Canon Neville Hughes who retired just under a year ago following 18 years of faithful ministry among the people of Mullabrack and Kilcluney.