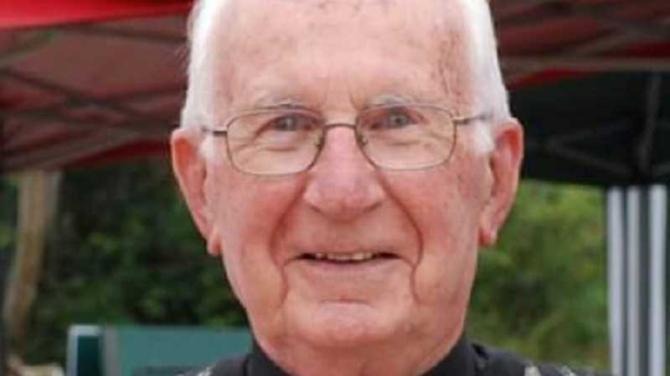 THE recent death of Fr Jim Feenan of Tullyherron marks the end of a 63 year long priestly ministry in the Archdiocese of Melbourne, a commitment spanning seven decades since he first set sail for his far off destination in October 1956, writes Joe McManus.

He overcame serious illness in his early years, periods of home sickness and adjusting to a different culture and endeared himself to generations of parishioners with his work ethic, superb social skills, sheer priestly kindness and dedication.

Born in August 1926 to Frank and Mary Feenan (nee Kenny) he attended Tullyherron Primary School and later St Patricks College Armagh where he won a MacRory Cup colleges football medal. He then decided to go pursue the priesthood and entered Maynooth for the Archdiocese of Armagh.

But his studies were hampered when he was struck with pleurisy and almost died toward the end of his first year there, spending three weeks in the infirmary and was later let home. A specialist suggested he should not go back to Maynooth because it was a very unhealthy place with continual fogs coming from the nearby Bog of Allen. But he was told on a visit to Cardinal D’Alton that if he wasn’t going back to Maynooth, he couldn’t remain in the Archdiocese - the strict rule at the time. He then applied for Carlow and was accepted.

Carlow was established to educate priests for the English speaking world and from time to time bishops from the various dioceses would write to the college requesting students to consider working there. On one occasion Archbishop Mannix of Melbourne wrote and he thought about it and that’s how Melbourne came into the picture.

But in his third year in Carlow an even more debilitating illness struck and he had to go home with a TB spine, and lay in a Plaster of Paris in Daisy Hill hospital for a whole year. After another year recuperating at home Jim applied to Melbourne again and was accepted back to Carlow and eventually ordained on the 10th June 1956, three years after schedule.

Then began the long sea journey. Because the Suez Canal was closed with the crisis there at the time, his ship had to go right around Africa and across the Indian ocean, a six week journey. He remembered that journey clearly in his last visit to Tullyherron in 2012.

“I left on the feast of Christ the King on 28 Oct. The journey began when my brother Frank drove me down to my sister Rose in Dungannon. Then her husband Paddy Rice drove me to the airport in Belfast Nutts Corner and I flew to London, my very first flight, and stayed with Paddy’s married sister over there for three days. The first ocean stop was Las Palmas, next Cape Town, then Durban and then the long journey across the Indian Ocean to Freemantle. We stayed for three days in Freemantle, and on to Melbourne and ended the journey on 12 December 1956.

“The Indian Ocean was very rough and for a long period we weren’t allowed on deck at all. The ship would go down as if it was going under the water, and then it would rise up again and you could see nothing but the sky and this lasted for three days out of the 12 day journey from Durban to Freemantle. On this journey I heard about Ron Delaney winning the gold in the 1500m at the Olympics which were in Melbourne that year.

“I was met in Melbourne by a few Carlow priests and among them was Jim Mc Guigan from Crossdall, Middletown. I was eventually told I was going to a place called Diamond Creek and the parish priest Tom Curran came in on a cattle lorry to pick me up, and the housekeeper cleaned out a room for me and got rid of the snakes.

“It was something of a culture shock, all a bit frightening. The people understood me well enough even though I had a very different accent. The standard of housing was basic but good. The food was more or less the same as at home. In general, the people were good workers and were very welcoming. After a year and a half at Diamond Creek I was sent to a new parish called Clifton Hill and had to learn Italian to cater for the many Italian parishioners

“The sense of distance from home was a serious matter in the early days. I often wondered what they were doing in Loughgilly. The only way I could correspond was by letter and that took a long time to get to Ireland. There were long distance lines but these were very bad, scarcely hearing anything with crackling and breaking up. I remember one day I met this man from Belfast and he asked me if I was feeling lonely. I had to admit the truth that I was a bit down. He asked me why I didn’t ring home and I told him there was no phone at home in Loughgilly.

“So I decided I would try and ring my sister Rose in Dungannon in her hairdressing salon. It was clear as a bell and it gave me a great lift. I realised that for the sake of a pound I was suddenly not out of contact at all, and home seemed a lot closer.

“I often wished in the early years that I had been able to stay in the Armagh archdiocese. I remember one time when I was home in the eighties I called to Armagh Cathedral to say a prayer and I heard this shout “Jim!”. I looked over and it was Cardinal O Fiaich.

“He took me into Ara Ceoli and told me that if I wanted to go into the Armagh archdiocese I would be very welcome. He asked me to think about it. I though and thought. But I finally decided against it. For over 25 years Melbourne had been good to me and had kept me and that was that.

“Anyway, I had been 18 months in Diamond Creek and two years in Clifton Hill, which was hard going. The parish priest didn’t speak to me. He was a bit of an odd ball. He was also Editor of the ‘Advocate’ in Melbourne. I did my own chores and got on with parish work, did the early mass in the Cathedral or in the convent or in the Brothers across the road.

“My next parish was St Peter and St Paul West Geelong, and the priest was a John Perkins, an Australian native and a very welcoming person. He played golf and cricket and was practising all the time wherever he could find a spot to practise. The house where we lived was a two-storey presbytery with a long corridor. He would roll the ball down the carpet to play cricket and he taught me how to play the game, and would also try out his tennis along the same corridor.

“I never picked up an Australian accent. I don’t think I was ever enamoured by the accent and so I more or less speak the same as when I left Ireland. When I went back home for the first time in 1962, it was by air all the way. It took me six weeks travelling out and less than two days getting home as the days of travel by ship were over.

“When I arrived back in August 1962, I didn’t settle in until Christmas. I was very home sick. When I was at home I met all the people including many old school friends and had to pluck up again and start all over. The up side of things was that they then had a phone at home, and I was in a better financial position and was home again in 1966. Again, the arrival of the jumbo jet age drastically narrowed the distance between Australia and home and this was narrowed even closer with direct phone lines and in later years with the internet.

“The normal wait to be a parish priest was about 14 years. I did 18 months in Diamond Creek, two years in Clifton Hill, five years in West Geelong, three years in Garden Vale and then I was sent to a place called Gordon as Administrator. The PP there was an Irishman and was starting to suffer from Alzheimers but he was a great man and great worker. He and I were very fond of Ceili music.

“Then unfortunately I got TB after all the years, and was in a sanatorium for six months. I went into the sanatorium in February1969 and was discharged in the middle of July. I had no place to go. There was no place to put a sick priest or a priest recuperating from TB. They brought in a new priest but the children whom I had been in contact with when visiting the two local schools had to be examined for the disease. So I came back to Ireland and stayed until the new year, but had to be careful regarding contact with people in the aftermath of having the TB.

“I was posted back to St Peter and Paul in Geelong where I had been before. The same parish priest had cancer then, and before it advanced too far he wanted to go to the Holy Land to visit all the places where the Lord lived. I worked as a spare priest for nine months and from there was appointed as PP of Brandon Park, a new developing place known as Nappy Valley because they were all young people with the clothes on the line in the summer.

“As a general rule I found the people respectful. There was no real falling off until well after Vatican 11. The bishop advised us to give general confession - the third rite - and the churches were packed for it at Christmas and Easter in every parish. But then it was stopped, but the people did not come back to confession. People appreciate general confession.”

Fr Jim served in seven different parishes as curate and parish priest. And while he enjoyed the Melbourne way of life he never lost his love of Irish music and culture. He kept a series of records, notably of the Mc Cusker Brothers Ceili Band, and through another Loughgilly native Paddy Mc Keown who emigrated to Melbourne, he kept in touch with the places where Irish music and song was being played in the city.

He retired in his own house in Portarlington beside the beach and looking across the bay to Melbourne, and from time to time helped out in various parishes where there was a shortage.

He died aged 93 on September 3rd in Arcare Nursing home in Portarlington with funeral Mass on Wednesday September 11th at Holy Spirit, Manifold Heights, Geelong, followed by interment in Western Cemetery, Geelong. A Mass in his memory was celebrated in St Malachy’s Ballymoyer on Sunday, September 8th .

Parish priest of Loughgilly Fr Malachy Murphy pointed out that Fr Jim never lost his strong connection with his native parish. He pointed to the many people from the area who had enjoyed his hospitality in Melbourne and as much as he loved life in Australia he enjoyed nothing better than walking the fields of the family farm and meeting old friends like Ted Finnegan and Pat Carlisle. He was described as a true embodiment of Loughgilly, and that his wonderful legacy would live on in the faith, music, heritage and community of his native parish.

He was predeceased by his brother Frank, sisters Mary Boyle, Warrenpoint: Nan Hatton, Armagh; Rose Rice, Dungannon and Betty Morgan, Crossmaglen and will be fondly remembered by his nieces and nephews, his wider family circle, neighbours and friends.

Fr Feenan was laid to rest in Melbourne on Wednesday, September 11.