Orangemen get ready to enjoy a Brew for Drew 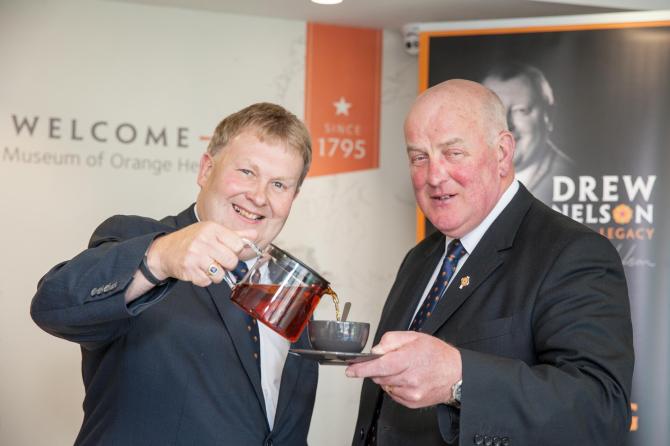 GRAB the tea and coffee, pick up the sugar and don't spill the milk - it's time to make a Brew for Drew!

Orange halls and other venues across Northern Ireland will be buzzing on Saturday as the Orange Institution gets ready for a very special coffee morning.

The Province-wide fundraiser is once again being held to benefit the Drew Nelson Legacy Project, which was launched two years ago to honour the late senior Orangeman and former Grand Secretary.

The appropriately named 'Brew for Drew' will be hosted on the morning of Saturday, September 28.

Local events are being held as follows:

He said: "It is our hope the coffee morning events will see the Orange fraternity come together in towns and villages right across the jurisdiction to enjoy refreshments and fellowship - whilst raising valuable funds for the Drew Nelson Legacy Project."

The Orange Institution is committed to permanently recognising the contribution of one of its most high-profile members, whilst benefiting the next generation of community leaders.

It intends to expand its current student provision in the university area of Belfast, with the long-term goal of creating a standalone 'Drew Nelson Centre' which would provide meeting space and accommodation for student members.

Grand Orange Lodge of Ireland Youth Development Officer Gary McAllister has been in post for 12 months now and has been working hard providing career advice and guidance to young people across Northern Ireland and the border counties.

Mr Henning added: "The Drew Nelson Legacy Project is the Grand Master's nominated appeal and a concerted effort across the Institution would make a real difference to the fundraising campaign on this day."

Prior to his death in 2016, Mr Nelson served as Grand Secretary of the Grand Orange Lodge of Ireland for 12 years.