On song to celebrate the heritage of Armagh City 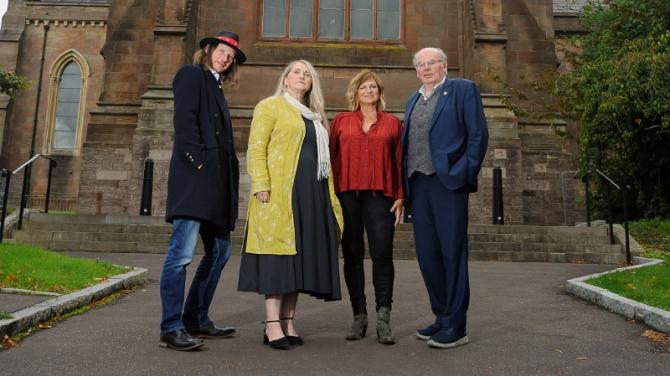 LOCAL artists will raise awareness of Armagh’s most historic sites at the 2019 Heritage Angel Awards ceremony on October 29 in the city’s Market Place Theatre.

The Heritage in Song project, part of the Heritage Angel Awards, will include performances from project curator Brigid O’Neill, Armagh natives Tony Villiers and Ríoghnach Connolly, as well as The 4 of Us – Brendan & Declan Murphy and the Armagh Pipers.

The artists will perform bespoke material on local sites including Armagh Gaol; The Seven Houses and the Cathedrals. Poet Maria McManus will also perform a specially created piece on the Armagh Observatory.

The event is supported by Arts & Heritage focused funder, the Andrew Lloyd Webber Foundation, together with Armagh City Banbridge & Craigavon Borough Council, and the Department for Communities in 2019.

The evening will be hosted by Wendy Austin, with special guest presenters including Joe Mahon and Marie-Louise Muir from the BBC NI Arts Show. Labelled in 2017 as the ‘Heritage Oscars’, the Heritage in Song element makes these awards like no other.

These artists follow in the footsteps of Duke Special; Anthony Toner, Gareth Dunlop, Eilidh Patterson and Eoin O’Callaghan who participated in this highly successful, fully booked initiative in Belfast and Derry-Londonderry over the last two years.

Ulster Architectural Heritage now invites the general public to book a free ticket. A chance to be in the audience, and among the first to hear specially made songs about Armagh from top artists, while supporting those from across Northern Ireland who are being recognised on the evening through the Heritage Angel Awards.

Brigid O’Neill, Singer-Songwriter, “I am so pleased to be both curating and writing for Heritage in Song - now in its third successful year - and very excited indeed about the incredible line-up of artists for this year in Armagh!

“It’s been thrilling to see the idea come to fruition, as writing bespoke songs widens our audience and means we can really bring to life the history and purpose of the buildings and the fascinating stories that they have to tell.

“And telling stories is what we songwriters do best!”

“The Heritage in Song element, reframes perspectives on built heritage through the medium of the Arts.

“The exceptional talents of local artists as a platform to celebrate the unique built heritage of Armagh City and stories relating to it.

“The contribution of heritage in song to the event makes the awards ceremony all the more special. We look forward to hearing the songs and poetry that the artists come up with this year!”

All welcome. Free tickets are now available at www.ulsterarchitecturalheritage.org.uk/events.