Chloe and host of others rising to the challenge 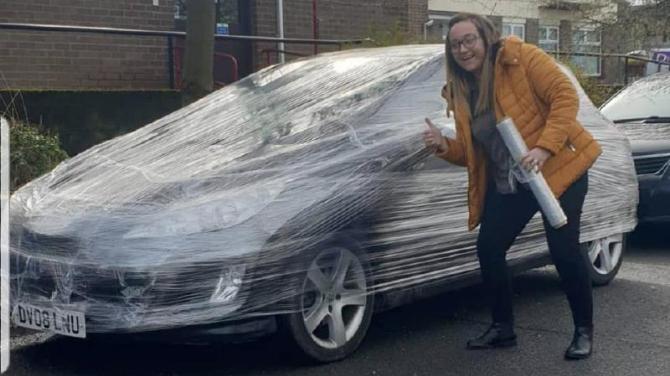 THE results of a unique challenge – namely, to organise 24 different work-outs a 24-hour period in support of the Epilepsy Action charity – will be seen in Armagh on Friday-Saturday, October 11-12.

Responsibility for the event, to be staged at Bubbas Project Gym in Lowrys Avenue, rests on the shoulders of Chloe Clarke who has undertaken a year-long challenge which entails doing something she has never done previously each day of the year.

To date her challenges in 2019 have included shrink-wrapping a car, dancing around her own vehicle while stuck in traffic, attempting her first-ever headstand, wearing the Lord Mayor’s Chain of Office, celebrating International Women’s Day by burning her bra, eating a roast dinner with chopsticks and having witnessed an MRI scanner in action.

But this forthcoming challenge, for which she is having to recruit 24 individuals or groups to do their stuff for one hour apiece, is the biggest to date. Normally she is self-sufficient. Not this time, however.

She told The Gazette, “Usually it’s a case of me having to do something that I myself have been challenged to do. But this time I’m going to have to rely on other people, so that’s very different because I’m dependent on them. But it’s all for Epilepsy Action – that’s why I do this.

“Unfortunately I won’t be able to take part to the extent I’d like to, because when I was doing a challenge back in May, I fell off a hoverboard and now have Sciatica as a result.”

Mercifully, such are her personality and her powers of persuasion that she has succeeded in recruiting an impressive army and assortment of people, all of whom are willing to support her cause.

They include Ireland’s current strongest man and a previous holder of that title, boot camps – one overseen by Belfast’s Ian Young - and a one-hour routine courtesy of Armagh Boxing Club, all on the Friday night.

Saturday’s line-up will include Tae Kwon Do, yoga, Run Armagh, more boxing by the Armagh BC members and a 1990s-style Mr Motivator work-out.

Already 21 of the 24 one-hour slots have been filled, much to Chloe’s delight.

“I wish I was able to take part in more of what will be going on, but because of this Sciatica I’m very limited in what I’m able to do at the moment. But the support of all these other people has been fabulous. I’m really grateful,” she said.

“But at the end of the day it’s not about me – it’s about being able to organise this in order to raise awareness of Epilepsy Action.”

At the start of 2019, Chloe went public in explaining, “Our eldest daughter [Lilli] was diagnosed last year with Epilepsy and it was like the rug had been pulled from under all our feet when we were told.

“We didn't expect it and certainly never contemplated it, either. We typically associated 'fits' and 'episodes' with someone having a seizure on the floor and that’s it.

“But Lilli doesn't suffer from the stereotypical epilepsy - she has absent and myotonic seizures and since diagnosis she has been prescribed medication which has now stopped those.

“Any money that I can raise to help with research for drugs, support those who have been diagnosed and also help educate people on all the facts and symptoms etc is my aim.”

Those have been her goals throughout the year to date, and with the days now starting to run out – incredibly, we are now into the final quarter of 2019 – the challenges are becoming tougher.

“I’ve never had to organise anything on this scale before, for example. so it’s all new. But I’ve had lots of help from other people and I’m really grateful to each of them,” she said.

She certainly has not been alone..

“Bubbas and the staff there have been great and so have Armagh Business Park. It’s all been a hand-in-hand, co-ordinated effort and it is going really well.

“Hopefully there will also be a few playground rides on Saturday and that means the kids and parents should be able to enjoy a bit of family fun from noon until 4pm.”

Lord Mayor Maella Campbell has confirmed that she will be present to open the event at 4pm on Friday, October 11 – and, all being well, she will return for the close 24 hours later.

And if you can attend at any point, Chloe would be delighted to have your support.