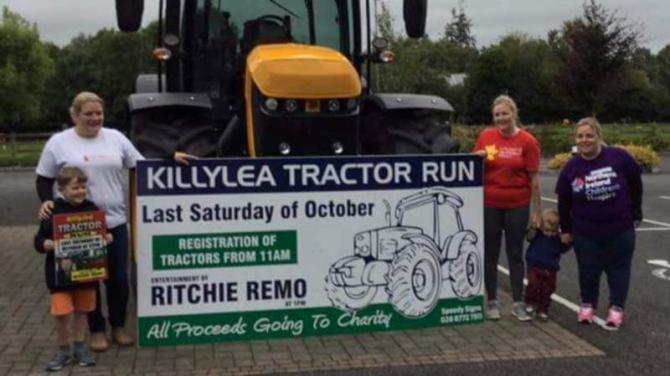 PREPARATIONS are now well underway for this year’s Killylea Tractor/Truck Run which will be held on Saturday, October 26.

The charities are particularly close to the hearts of the Bloomer family from Killylea, who have been instrumental in organising the popular and fun family day out since 2015.

This year’s event will get underway at midday in the grounds of Killylea Church Hall, with the run leaving at 3pm.

As well as the large turnout of tractors and trucks anticipated, there will also be food available, as well as entertainment from Paul Kelly, Aiden Clerkin and Ritchie Remo and a bouncy castle to keep the children entertained.

This is the second year lorries have been invited along to the event and one of the organisers Joanne Hale told the Ulster Gazette, it is hoped this section will grow even further this year.

Joanne explained the charity event had come about following a discussion with friends and it was their son who had suggested the idea of holding a Tractor Run.

“As a family we always wanted to hold a charity event,” she said.

“We knew we wanted to support local charities, in particular a children’s charity.

“After some research, we decided on the NI Children’s Hospice who provide respite, symptom management end of life care for over 300 infants, children and young people.

“Both my sister Susan and I are official volunteers for Air Ambulance NI - it is a charity very close to our heart.

“AANI brings emergency room level of care to the casualty and can be in any part of Northern Ireland in 25 minutes.

“We became aware of the Children’s Heartbeat Trust in 2015, when our nephew John Hawthorne was diagnosed with aortic valve stenosis.

“The charity have been a great support to our sister and her family, especially when he went through heart surgery in Dublin.

“The surgery was a great success and John is now doing very well.”

In addition to the three Northern Ireland charities, other beneficiaries over the years from proceeds raised were Killylea Primary School and Tiny Tots Corner Playgroup in Killylea.

Joanne has set a target figure which she hopes can be reached following this year’s event.

“This is our fifth year running the tractor/truck run and to date we have raised over £14,000 for our charities.

“We would love to hit £20,000 to mark our fifth anniversary,” added Joanne, who said it promises to be “a great family day out”.