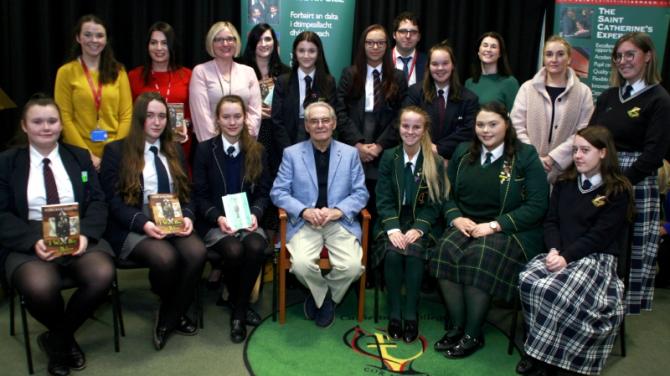 Thursday’s event was attended by five local school and invited guests, and was supported by the Executive Office and the Holocaust Memorial Day Trust.

Privileged pupils, staff and special guests, including Mayor Mealla Campbell and Inspector Kieran Quinn, Second Commander of the PSNI, listened with admiration and awe as genocide survivor, Tomáš (Tomi) Reichental, shared his experiences and brought his message of hope and peace.

Mr Reichental spoke eloquently and vividly about how he survived the Nazi concentration camps of the Holocaust during the Second World War. During his hour long talk and subsequent interview, he spoke about the moment he was captured, along with his brother, mother and grandmother, and his experiences of the Bergen-Belsen concentration camp in 1944, where he remained until it was liberated in 1945.

This event, organised primarily by Miss Aisling Quinn, Teacher in Charge of History at Key Stage Three in St Catherine’s College, in liaison with North South Ministerial Staff Sean McAteer and Donal Moran, is part of a series planned in the lead up to Holocaust Memorial Day 2020. It takes place on January 27, and next year will mark the 75th anniversary of the liberation of the Auschwitz-Birkenau concentration camp in 1945, and July 2020 will mark 25 years since the genocide in Srebrenica, Bosnia.

St Catherine’s College Principal, Mrs Noeleen Tiffney, said: “It has been a privilege to listen to Tomi’s first-hand account and to experience ‘living history’. His message that we should ‘Never Forget’ will stay with us as this has been an unforgettable experience for the staff, pupils and special guests in attendance today.”

Pupils from St Catherine’s College, Molly O’Dowd and Aodhán Thornbury thanked him for sharing his experiences.

Mr Reichental left his audience with a powerful challenge to “create a civilised society where we can all live in peace”, encouraging his listeners to guard against “identity-based hostility” of any kind.