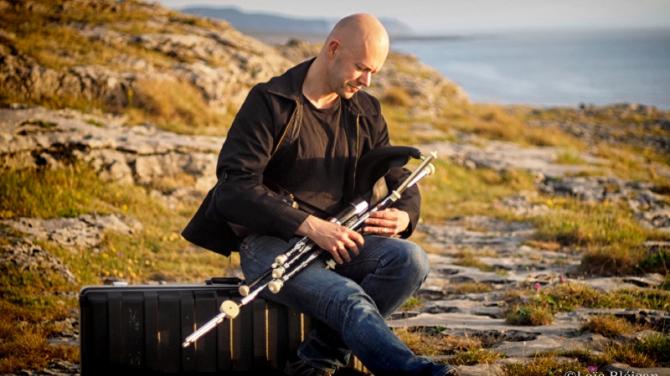 WITH so many amazing events to select from audiences are going to be spoiled for choice when the 26th annual William Kennedy Piping Festival opens its doors to the world on Thursday 14th November with a wonderful diverse line-up of world piping from Scotland, Asturias and Galicia (Spain) Iran, Italy, France/Brittany, Ireland and Macedonia.

From then on through Friday 15th, Saturday 16th and Sunday 17th November Armagh Pipers Club will be presenting no less than 50 different events in venues all round Armagh City using many of Armagh’s iconic venues highlighting Armagh’s place as a unique cultural hub.

The Festival Concert still has tickets despite the huge take up from visitors heading to Armagh from across the globe. This concert takes place in Armagh’s wonderful Marketplace Theatre on Saturday 16th November at 8pm with doors opening from 7.30pm.

Among the headline acts the uilleann pipes and fiddle duo of David Power Waterford and Martin Hayes Clare now living in Madrid is attracting huge interest.

Billed as an ‘Exploration of Piping in Iran and Ireland’ the collaborative genius of Iranian musicians Moshen Sharifian and Mohammad Jaberi and Irish musicians Niall Vallely and Emer Mayock accompanied by Breton flute player Sylvian Barou will take the audience into a whole new experience of music. To add to the intrugue of this encounter we have just discovered that nestling in the Northern Mountains of Iran is a little town called Armak in Persian and translated as Armagh on the map! So who knows what musical experience will evolve in the course of this collaboration. You’ll have to get a ticket to find out.

The Armagh theme in this concert continues with the third act featuring the musical wizardy of Armagh flute and whistle player Brian Finnegan interacting with the wonderful Gaelic singing of Grainne Holland and the guitar virtuosity of Tony Byrne.

This novel event feature a selection of piping familes from all over Ireland including the Rowsome family inheritors of 5 generations of piping led by the grandson of the famous Leo Rowsome Kevin Rowsome along with his two daughters Tierna and Naoise Rowsome great grand daughters of Leo’s.

Other families to feature will be the Keanes from Galway, Potts from Dublin, McKeons from Dublin but with Monaghan roots, the Mulligans from Dublin but with roots in Leitrim. More locally there are 3 generations of Vallely’s playing with brothers Brian and Dara from Armagh, Brian’s two sons Cillian and Niall and grandson Oisin making his Piping Festival debut.

IT’S NOT ALL PIPING

While the William Kennedy Piping Festival certainly celebrates piping in all its forms the festival features all the instruments played in traditional music, as well as singing and dancing. There are classes and workshops for Harp with lengendary Harp Player Grainne Hambly, Fiddle with Siobhan Peoples daughter of the late, great Tommy Peoples, Flute with Sylvain Barou, Banjo with Stevie Dunne, Singing with Grainne Holland, Accordion with renowned box player Christy Leahy originally from Cork but living for many years in Rome, Scottish Step Dance with Sophie Stephenson from the Isle Skye, Highland and Border pipes with Calum McCrimmon and Lorne MacDougall and finally 3 graded uilleann pipe classes with Eamonn Curran, Kevin Rowsome and Sean Potts.

The Festival will see the launch of the Lecture Compilation of the William Kennedy lectures delivered over 25 years of the festival. This takes place in the Armagh County Museum at 6pm on Friday 15th. The evening will include a talk on the family of Lord Rossmore from Monaghan and his famous pipes recently restored by Eamonn Curran.

The Armagh Pipers Club is dedicated to musical education and the festival programme continues this commitment to helping young people find their way into music. There is a wonderful schools concert which this year for the first time takes place in Armagh 1st Presbyterian Church. Then there are two days of activities exploring the Irish/Scottish common Gaelic culture through La na Meanscoileanna for pupils attending 2nd education through Irish and La na Gaelscoileanna for pupils at Irish medium primary schools.

THE WILLIAM KENNEDY ACADEMY OF PIPING

The William Kennedy Academy of Piping has over the years developed into a major International school of excellence in Piping with three intensive days of classes, lectures and workshops starting on Friday 15th and running through to Sunday evening. The Academy is based in the Conference suites at the Armagh City Hotel.

The Festival programme has now been printed and copies are available through the Marketplace Theatre, the Tourist Information Centre, the Armagh Libraries and various other premises around Armagh. Full details of the programme and access to ticket booking can be found in the festival website wkpf.org or by visiting the Pipers Club in Scotch Street/McCrums Court.