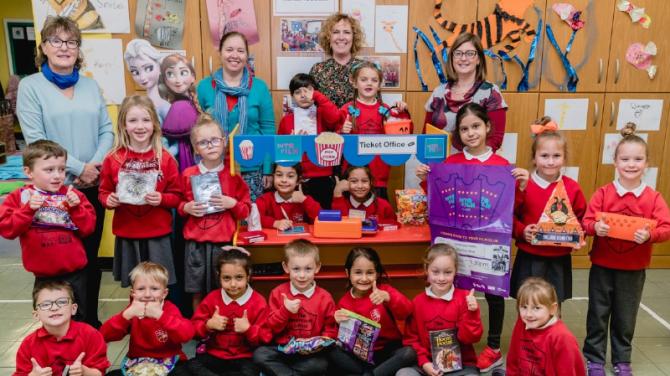 ARMAGH’S 20-pupil Drelincourt School, which specialises in educating youngsters in the Years 1-3 age-band, has turned the world of films into a means of teaching literacy, maths and vital social skills.

And with English being the second language for four out of five of those who attend - Lithuanian, Latvian, Russian, Polish and Bulgarian are the others – film is proving to be an all-important medium.

Sixteen of The Drelincourt School’s 20 youngsters come from a variety of backgrounds. And because, between them, they speak any one of six different languages - communication used to be quite a problem.

But it’s one they have now managed to solve to such an extent that they have just been named the UK’s ‘Into Film’ Club of the Month!

With all of The Drelincourt pupils being under the age of eight, this achievement recognises its success in using film to create a whole new learning experience.

Friday afternoons see the school - which is situated beside The Folly woodland – transformed into a mini-cinema. Remarkably, it’s the children themselves who run the show; they choose the film, promote it, ‘staff’ the box office, collect the tickets – even and serve the popcorn!

Throughout the week, any would-be cinema-goer must ‘earn’ his or her ticket by taking part in a variety of school activities. Their reward for the successful completion of each of these activities comes in the form of a 10 pence coin – the price of a seat in the cinema.

Popcorn is served once per term - in recyclable paper cones which the children themselves make. The popcorn is served to their classmates from an old salad bar, converted into a special counter for the occasion.

Post-film reviews are part of the process, too, with the youngsters being given topics for discussion. To date these have included the quality of the music, the acting and the humour.

The result? They are learning literacy, language development, maths – through earning their ticket money and working in the box office –plus social skills as a result of agreeing on the choice of film, to say nothing of manners as they learn to wait patiently in the queue before entering ‘the cinema’.

Teacher Mrs Sharon Walker said, “We’ve had a film club for the past five years but we really wanted to make it an even more important learning and developmental tool.

“With just 20 pupils, our children speak six languages between them including Lithuanian, Latvian, Russian, Polish, Bulgarian and English. Film has the power to unite them.”

As for the children’s film choices to date, she explained, “They’ve watched the Peanuts Movie, Bedknobs and Broomsticks, Cinderella and Cars. Their next movie will be a black and white Laurel and Hardy film.”

Highlighting the role of Into Film she said, “We’ve had such amazing support from them. I hadn’t been aware of the resources they have online; there are so many valuable teaching tools and they’re all available free.

“As well as providing the films they have come out to the school to see what we’re doing and to encourage us,” Mrs Walker enthused.

Into Film’s Lorraine Magee expressed her delight that The Drelincourt School had won Film Club of the Month award in what is a national programme.

“We are so impressed by the way they’ve taken their film club to the next level,” she said. “This is such a happy place and by using film to teach, the children really look forward to coming to school and participating in the club.”

Needless to say, the winners themselves were equally delighted when she presented them with a £100 voucher to spend on their club.

Into Film is a UK-wide organisation with a regional hub in Northern Ireland. It aims to put film at the heart of children and young people's education, helping to support their academic, cultural and social development.

The organisation runs an annual children’s film festival and also supports film-making projects through industry events as well as through film clubs in local schools.

The Drelincourt children will get the chance to check out that competition later this month when they make their way to Armagh’s Omniplex to watch Peter Rabbit as part of the free Into Film Festival.

The youngsters’ teacher, Mrs Walker, said, “I love the look of excitement on their faces every Friday morning - and seeing the way the children are growing in confidence.

“One child told me that Film Club is the best day ever. They’re learning so much, but it’s so much fun.”