It's blast off for Christmas at Armagh Planetarium 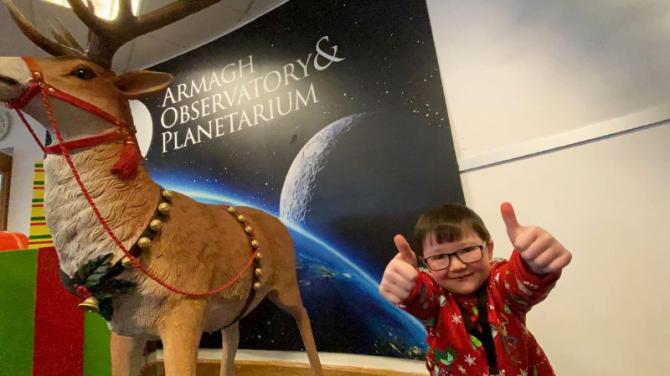 ARMAGH Observatory & Planetarium’s (AOP) Mission Santa show has proved so popular that organisers have had to add another date to this magical family event.

Over 1,000 children have already met Santa Claus during his first ever visit to the Planetarium, but on Friday December 20 you can join the E.L.F. crew for one last time as they blast-off on a Christmas adventure like never before.

The out-of-this-world experience includes: admission to “The Alien Who stole Christmas” full-dome show, a visit to the elves’ mission control with sing-a-longs, arts and crafts and a visit with Santa himself. Each child will also receive a present and a printed family photograph.

AOP Education and Outreach Manager, Sinead Mackle said: “Santa has been spotted many times on our telescope as he makes his way around the world every Christmas Eve, but we are thrilled that he has made time in his busy schedule to visit us this year.

“Mission Santa has been incredibly popular and we are thrilled that Santa has agreed to return on Friday December 20. He says he has just time for one more visit before he must return home to prepare for his busiest night of the year.”

Written and produced by BNL Productions LTD, Mission Santa on Friday December 20 begins at 3pm. The experience lasts for up to 90 minutes and booking is essential.

Meanwhile, AOP is captivating audiences with the Mystery of the Christmas Star show which seeks to discover a scientific explanation of the star which led the Three Wise Men to the Baby Jesus’ manger.

Running daily from Tuesday until Saturday through until January 4, the 30-minute show is a modern retelling of the Christmas story which transports audiences back over 2000 years to Bethlehem.

“The star is referenced in the Bible but science has also sought to explain the phenomenon in the night sky with theories of comets, novas, supernovas and meteors. The show leaves you to draw your own conclusions.”

The show is recommended for children over the age of six. Children under 16 should be accompanied by an adult. Price is £8 for adults, £7 for children and family (up to five) £25. Enjoy 10% off by using code: Winteroffer.

Armagh Observatory & Planetarium has a number of exciting events planned throughout 2020 beginning on January 3 with The Planets 360 dome show – an immersive re-imagining of composer Gustav Holst’s, The Planets. In February a StarTracker Night takes place on Valentine’s Night. The telescopes will be operational and there will be a dome show with a talk from one of AOP’s astronomers.

For more information and to book Mission Santa or the Mystery of the Christmas Star, visit www.armagh.space