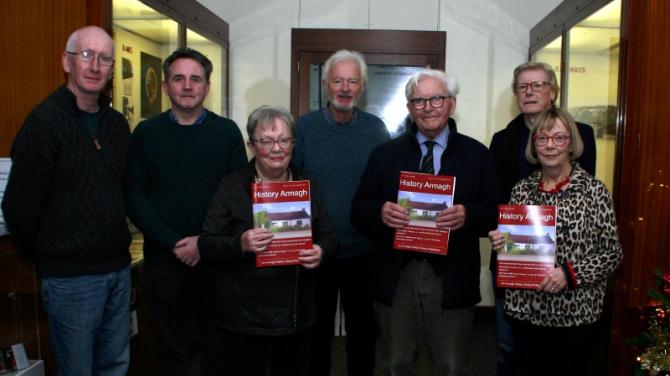 HISTORY Armagh, the journal of the the Armagh and District History Group, has been launched this week in time for Christmas.

This is the fifteenth year of publication and once again promises to provide a wide range of well illustrated articles on aspects of Armagh’s past.

Gerry Oates continues his scholarly but highly readable place name research, this time focussing on Kildarton parish. Mary McVeigh relates the intriguing story of Vincent Cassidy, from Ogle Street, who married a London socialite, the daughter of the Earl of Latham, but it was not to be a long relationship, because 10 months later he died in what were certainly mysterious circumstances. A second article by Mary recounts the election pacts made by Unionists, Nationalists and Republicans in Armagh in 1920, which indicates that little changes in politics here.

The history of one of Armagh’s most prized architectural and cultural assets, the Robinson Library, is told by Stephen Day, who also writes in a second article about one of the city’s lost buildings, the Armagh Fever Hospital.

The adventures of a naval surgeon, including his involvement in the capture of a slave ship off the coast of Africa, is told by Richard Burns. Alexander Lane, who was married into the Stanley family of Armagh, later set up in practice in Abbey Street.

Kevin Quinn traces the history of a traditionally built rural cottage owned by the McCreesh family at the Navan and points to its significance as an architectural and cultural landmark in the heart of a ritual landscape. Sean Barden adds to his fascinating research into the Vicars Hill murder. He asks was the treatment of Belinda Prior in Dundrum Asylum a case of Victorian institutional abuse?

Stuart’s history of Armagh is well known but little is known about the man himself. Canon W.E.C. Fleming’s article is a very necessary biographical sketch of this famous historian of the city.

The story of Mary Connolly, the Armagh born street singer who rose to stardom and the men who were involved in the advancement of her career, including Joe O’Gorman, a close ally of Jim Larkin, the trade union leader, is related by Eric Villiers.