Heading to Belarus to help the helpless – thanks to you 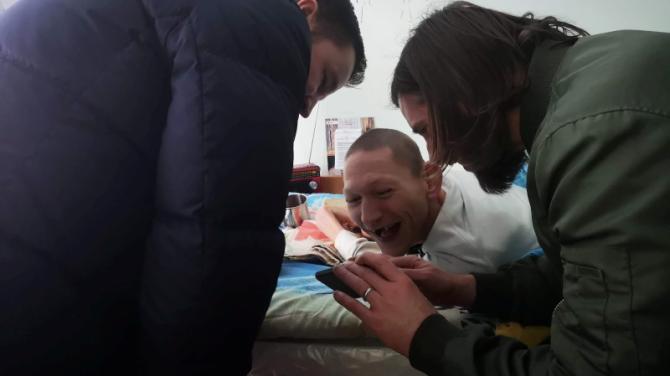 THE International Development Orphan Programme isn’t one of the better known charities; it certainly wouldn’t be up there with the likes of Oxfam, Concern, Trócaire, Save the Children, Christian Aid or TEAR Fund for example.

But Armagh fundraiser, 41-year-old Stevey McGeown, is hoping to raise its profile in a big way on Sunday, December 22, when he undertakes his latest challenge – walking two laps of Armagh’s Mall barefooted.

To date 114 kindred spirits have enlisted to join him. His target, however, is 300 fellow-round-The-Mall walkers, “so that’s just another 186 to go,” he jokes.

Given his ability to muster support and engender a spirit of bonhomie, it would be ill-advised to dismiss his chances of doing that. He is not a man who takes ‘no’ for an answer.

With December 22 being the day after the Winter Solstice, it may well be very cold, And even if that can’t be guaranteed, something that can be is the fact that the pavements will be unyieldingly hard. Does that deter him? Not in the slightest.

“Sure the craic will be great; we’ll do the walk and then we’ll have a drink and a bit of a sing-song in the cricket club,” he says matter-of-factly.

Beneath the veneer of joviality, however, beats the heart of a proven fundraiser whose confidence in his ability to undertake and complete tests requiring real physical and mental strength is based on his impressive track record.

This includes him having completed five dozen back-to-back ultra-marathons. If you are unaware of what an ultra-marathon entails, it’s a run of 40 miles rather than the usual 26, And if maths isn’t one of your strengths, five dozen in succession translates as one of those 40-mile runs on each of 60 successive days.

He has also raced against a horse, incidentally, and in all such ventures he has had the support of the local population.

“The people of Armagh are very, very good to me,” he stresses. “Publicans, restaurants, the shops… they all put out collecting boxes for us. We do an annual Christmas Eve collection on the streets and last year that raised £3,000.

All of that money goes straight to the charity, for as Stevey explains, “As volunteers we pay for our own flights and accommodation – that comes out of our own pockets.

“Trips like this cost a couple of thousand pounds each, but with us paying our own way it means that 100% of what we raise goes to the charity rather than anywhere else.”

Stevey – who has been involved with IODP for four years- is self-employed and his day job includes running retreats and seminars as well as offering one-to-one coaching for entrepreneurs.

On New Year’s Day, when many people in the UK and Ireland will be sleeping off the after-effects of Hogmanay, Stevey will be on the road to the airport at 6am. His destination? The Republic of Belarus in eastern Europe, where he will stay for a week. He will be joined by 16 volunteers from Ireland, two from The Netherlands and one from the USA.

The purpose of their visit is simply to provide help, spread joy, offer encouragement and demonstrate love in tangible terms.

“We’ll act as Santa Claus to 600 children in a total of six different orphanages,” he explains.

With Belarus being a predominantly Orthodox Christian country, Christmas Day is celebrated on January 7.

“We’ll also be going to a children’s prison, where there are 120 prisoners aged between eight and 18,” Stevey continues. “As well as that we’ll be visiting some centres for adults who have special needs, because when all is said and done they really are children at heart, too.

“We try to provide what they need; it could be a generator, it could be electrical sockets- basically it could be anything. Our aim is just to supply whatever they need to keep the place in good working order.”