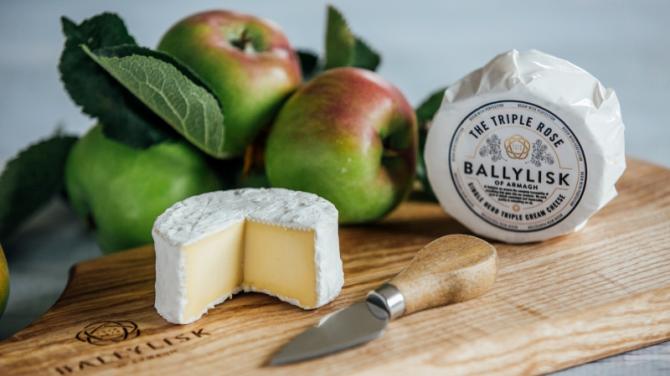 THIS Christmas, thousands of people across the world indulged in cheese from Northern Ireland thanks to local producer, Ballylisk of Armagh.

The company has been receiving Christmas orders since September and was estimated to have sold 75,000 rounds of its triple cream cheese by December 25.

With cheese lovers getting ready to create the perfect Christmas cheeseboard, the business has already seen a 30% increase in sales.

Founded in 2016 by Dean Wright, Ballylisk of Armagh launched its very first product at Balmoral Show 2018 – Northern Ireland's largest agricultural and food show. Its Triple Rose cheese went on to win the Best New Product award on the same day and remains the company’s flagship product. It also won two Gold Stars at the 2019 Great Taste Awards and was a finalist in the 2018 Great British Cheese Awards.

To ensure top quality, Ballylisk of Armagh has full control over the production process from farm to fork. With Dean being a fifth-generation farmer, the company grows its own grain and breeds its own cows.

The Triple Rose cheese is processed daily using milk freshly produced on a farm that has been in the Wright family since 1820. With just four employees based in its Portadown factory, exports account for 40% of the company’s turnover, expected to reach 70% in the next 12 months.

International Trade Secretary, Liz Truss said, “Christmas is a great opportunity for UK businesses to boost sales, so it’s great to see Ballylisk of Armagh giving people across the world a taste of cheese from Northern Ireland.

“I would encourage other cheese producers to tap into this growing industry and get in touch with the UK Government for export support.”

Besides exporting to Portugal, Italy and France this Christmas, Ballylisk of Armagh has sold 1,000 rounds of cheese to long-standing customer Fortnum & Mason. Its top clients also include five-star hotels, Michelin star restaurants, and high-end delis across Northern Ireland.

Ballylisk of Armagh currently receives 10% of orders online but is looking to increase this to 50% by next year. To keep up with demand, the company plans to transform its online business and employ additional staff to help manage the increase in production and sales.

With huge growth year on year, Ballylisk of Armagh is diversifying its product range and will launch a new brie and smoked brie for the first time just after Christmas. The business is also looking to enter new markets in 2020, including Japan, Dubai, China and America.

Dean Wright, Founder of Ballylisk of Armagh, said, “Exporting is a big part of our business at this stage and we see it as a huge area for growth, so we certainly won’t limit our boundaries to Northern Ireland.

“We have seen a significant increase in sales since September and we hope this continues at the same rate throughout 2020.

“The Ballylisk brand is recognised in the UK and further afield for its high quality, and we have already had enquiries from clients in Dubai, China and the United States; our first shipment will be leaving Portadown early next year. We are also in discussions with one of the largest cheese distributors in the UK, which will boost our sales figures again.”