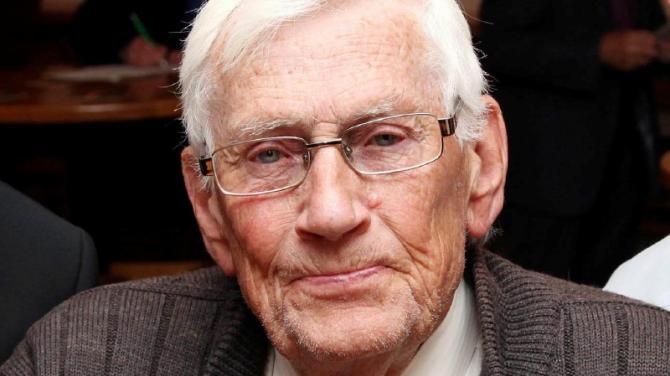 SEAMUS Mallon’s last major interview with the Ulster Gazette was to commemorate the 20th anniversary of the signing of the Good Friday Agreement.

In it he spoke of his heartache of having to visit the families of Philip Allen and Damian Trainor following their murder in Poyntzpass, and reflected on the hard road which politicians had to go down in order to find an agreement.

First published in 2018, when Stormont was not sitting, the former Deputy First Minister hit out at the DUP and Sinn Fein for not having the resolve to get back into Government.

As a tribute to Seamus Mallon, here is that interview in full.

Former Deputy Leader of the SDLP

IN the ten years previous to the signing of the Good Friday Agreement there was no political focus, parties were working in a void trying to deal with the awfulness of the violence which was taking place on our streets.

It wasn’t hard to envisage the need for a political breakthrough but maybe it was hard to see it happening.

If you want revenge you dig two graves – in the sense that violence eats into a community, unnerves everyone, people become suspicious and we were all, certainly in this part of the country, living on the edge.

The first meeting of the talks was a remarkable experience in the sense that you had all the top brass there. Senator George Mitchell, I found very efficient but hard to get close to. He knew his way around negotiations as you would expect of a Senate majority leader. Then you had the British and Irish government ministers, John de Chastelain and his people – it was really remarkable.

To the right of us were the loyalist representatives which included John White who had murdered a member of our party, Paddy Wilson – it was a strange feeling to be sitting beside him. To the left was the DUP with the Ulster Unionists further along.

When Sinn Fein came into the talks  the atmosphere went up a few degrees. An interesting thing about Sinn Fein is I can’t remember them putting any proposal in, in relation to Strand One, and I was speaking to David Trimble recently and he doesn’t remember any either.

At that time the main weight of decision making fell on our shoulders along with the UUP. The DUP were outside the door by this stage – they were gone. Sinn Fein were inside but also doing negotiations outside.

Bigger issues came in – decommissioning became a huge issue. But there was never a time when we felt we couldn’t make progress – we all recognised that the country was in such a mess and we shuddered to think where we would have gone.

During one meeting David Trimble and I were sitting together when we got a message that there was a bomb in Markethill. We both got up and left and went straight to Markethill – that was the terrorists sending a message. That made me certainly more convinced that we had to succeed. Then not long after that two friends, Damian Trainor and Philip Allen were shot in Poyntzpass – again I went to Poyntzpass. We stood around talking to people then the word came through that the two fellas had died. They had been having a pint after work and talking about motor cars.

David Trimble and I went down to Poyntzpass the next day. We visited the Allens first and sympathised with them and then walked up the street and past groups of people almost at every door, we stopped and talked with them. Then we went up to the Trainor home and sympathised before going back down the street to talk to more people. The community appreciated the fact that we came together, they appreciated the fact that we called at the houses and were very much in support.

Those boys were two friends, one a Protestant, one a Catholic who wanted to get on together and it was almost a mirror image of the political problem. We had two fellas friends for life, killed for what? It was then I knew we were going to get there.

The last week was long and hard, I barely got any sleep, John Hume hadn’t been well, so I was handling things.

The last issue agreed was Strand One. We met with the Ulster Unionists at 9.20pm on Holy Thursday night and it was a difficult meeting. Reg Empey, John Taylor, Jeffrey Donaldson and David Trimble were present. David was getting excited, but I knew what he was at, he wasn’t talking to us he was aiming his words at Jeffrey. The meeting didn’t last long and when we came back Jeffrey wasn’t there, we made an agreement, shook hands and that was it.

David and I were elected First and Deputy First Minister, proposed by John Taylor and seconded by John Hume. It was a bed of nails for that period. We had Drumcree, the Quinn brothers tragedy and then Omagh. We had the issue of policing, we had to devise how the Assembly would work, the number of committees, the number of ministers, decommissioning and justice – it was all heavy lifting.

If I never do another thing in my life I will go to my grave happy knowing that there will be no more murders like the killings of Damian Trainor and Philip Allen. The peace was worth fighting for, it was worth getting and it is worth preserving.

The situation now at Stormont makes me both sad and angry. All the work that went into it has been squandered.

This business of having politics issue driven such as the Irish Language is not right – I did Irish for A-Level, I like the language and I like to hear it spoken well but it doesn’t belong to me and it doesn’t belong to Sinn Fein but they are using it as a political cudgel. Then you have Arlene Foster who has a great capacity for saying the wrong thing at the wrong time.

What we have to do is ensure peace then start to face facts – in 100 or 400 years time unionist and nationalist people will be living here so if that’s the case surely we must make this the best place to live and create an environment where everybody can call Northern Ireland home. Home gives you comfort, security, warmth, love and if we are all saying this country is home we can be away down the road happy.

I get the feeling the DUP and Sinn Fein want back into Stormont but haven’t the nous to know how to get back in. They may want another president to come in and hold their hands but surely to God they can stand on their own feet nowadays.