Speers calls for action on hard shoulder parking at Gosford 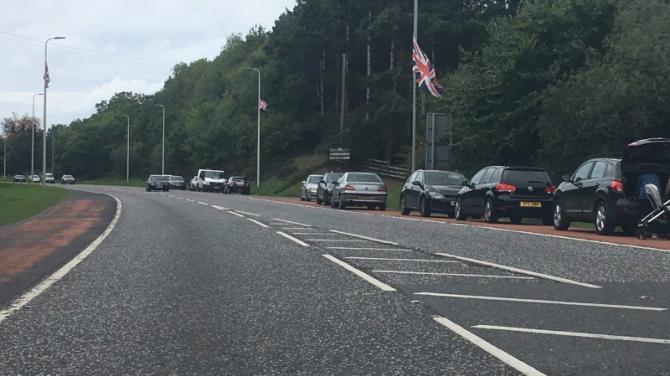 WITH winter coming to an end and spring fast approaching, Alderman Jim Speers has urged visitors to Gosford Forest Park not to park along the main Markethill-Armagh road.

In addition, he is asking the PSNI to make it illegal to do so and to enforce that law.

The veteran Ulster Unionist Party member of Armagh City, Banbridge and Craigavon Borough Council on which he represents the Cusher District has highlighted the dangers caused by parking on the hard shoulder close to the entrance to the Gosford.

The entrance to the popular parkland is on the A27 – the main route for Armagh-Newry/Dublin traffic. This is a particularly busy road along which traffic travels fast in both directions.

Describing the current situation as “an accident waiting to happen”, Alderman Speers said, “Following complaints from a number of people who were worried about this, I took a drive out there to see for myself what’s happening.

“A large number of cars were parked along the side of the road and, as a result, they were blocking others’ view in both directions.

“That meant it was almost impossible to emerge safely from Gosford and obviously that’s really dangerous.

“My second concern comes from kids = some of them very young - getting out of vehicles on the edge of a particularly busy road where cars are travelling at speed; that’s a real worry, too.”

Stressing that parking is affordable and spaces are plentiful in Gosford, he continued, “It’s £25 for a season ticket to get in there with your car and no-one has ever said anything to me to suggest that there is any problem in terms of parking spaces in Gosford.

“So I’d warn people of the danger to themselves, their families and other drivers of parking along the road. My advice is simply this – don’t do it.”

He is now asking the police to erect cones on the hard shoulder, pointing to the fact that when this was done in the past it served as a highly effective deterrent.

“Because it worked previously, I’d be hopeful that they’d reinstate cones along that stretch and therefore prohibit people park there.

“Obviously spring/summer are the busiest seasons for visitors to Gosford, so it’s absolutely imperative that this matter is dealt with now,” he added.