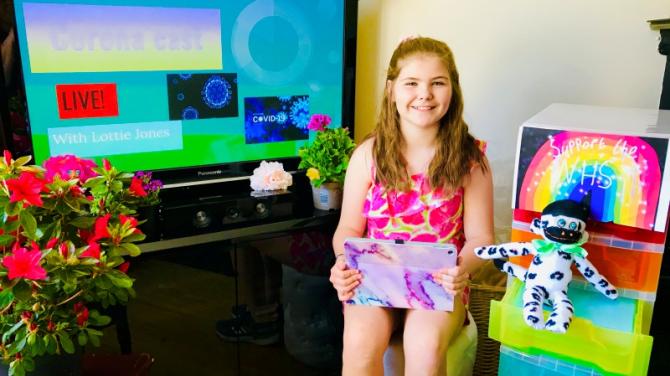 A NEWTOWNHAMILTON schoolgirl - turned newsreader - has been keeping herself entertained during lockdown by presenting daily coronavirus updates on the internet.

Lottie Jones has transformed the living room of her Armagh Road home into a makeshift news studio in order to bring viewers of her Corona cast the most up-to-date figures and information.

In order to prepare for her online broadcast, which airs each morning at 10.30am, the talented Cortamlet Primary School pupil begins her research before 9am, by gathering the latest updates.

Speaking to the Ulster Gazette, Lottie - who has a large following of family tuning in from England - admits she would like a career as a newsreader when she finishes her education.

Like so many other pupils, Lottie - who turned 11 on April 17 - had been looking forward to the final weeks of primary school, ahead of transferring to high school in September.

And, while that was cruelly robbed from her as a result of the coronavirus pandemic, she has decided to put her spare time to good use and has been keeping viewers fully informed of the ever-changing situation, while at the same time focusing mainly on the positive aspects.

“I enjoy doing it because I would watch the news sometimes, but the news is all bad things and you never see about the good things and the funny stuff, so I like to do funny stuff,” Lottie told the Gazette.

“There was one we saw on YouTube and it was about how to make a mask out of a thong. At one point it showed a granny and she had a big pair of knickers over her face so we put that on there just to give everybody a laugh.

“I have to be up before 9am because if I don’t get up before then, my news report would be late and I wouldn’t have time to get all my headlines done and it would just be a mess.

“I have to research and get the cases and the news headlines and then add all the rainbow photos and get a DIY.

“It is all done on an iPad and I just go onto my Apple News app and I do it through Google slides so I do text boxes and add images and then we have a Crown cast on the TV which allows us to get the slide onto the television and onto a big screen.

“I would like to be a newsreader – people say I have a very clear voice. I don’t know why but I like newsreading. I would say there is more work in the real news but I do put a lot of effort in to make it the best I can make it,” she said.

Lottie recalled the many milestones she has missed out on this year as a result of all schools having to close their doors early in order to help prevent the further spread of COVID-19.

“This is my leavers year and the P7s were supposed to be doing a bunch of stuff; usually at Leavers Assembly you have to do a play and we were due to head to Manchester at the end of May, but now we haven’t got any of that, so every morning there is something to look forward to now as you never know what the headline is going to be,” she added.

Lottie’s mother Joanne said she is extremely proud of her daughter for the dedication and effort she puts in to deliver the latest Corona cast updates.

“People look forward to watching her now,” Joanne said, before adding: “Every single day she does it, apart from Sunday she has a day of rest.

“She started it obviously the first week there was a lockdown so it’s been going on five weeks. She wants to be the next Susanna Reid on Good Morning Britain.

“She does it on a slide slow through her iPad and she gets children and adults to send rainbows in and she has done a Mr Corona and a picture of Miss Corona and people have been sending them in, as well as explaining how bad Miss Corona is.

“We get around 15 live viewers at the minute; we had 96 once and have lots of views on it after because a lot of people can’t go inside and watch it as obviously they have got other things to do. We probably get about 100 views a day on it, so it is good.

“It’s good for people who can’t get out. My mum Deirdre lives in Markethill and she looks forward to watching it every day. I have got family in England and they tune in and watch it and it is part of their daily routine now and they look forward to watching her at 10.30am each day.

“I’m proud of her. Lottie suffers at the moment from really bad anxiety since all this started and I think it has kind of helped her along a little bit, doing the research and knowing how many people have survived. She never puts the death rates up as she doesn’t want to know that. It’s kind of all you hear on the news is the negative, so she just tends to stick to the positives.

“She is doing really well and is just leaving Cortamlet Primary now and moving to high school , so she is missing out on everything and all the fun things. She loves school and is really missing her friends, so it’s been so hard for her,” she added.

l Lottie’s videos can be viewed live on her mother Joanne’s Facebook page and are available to family and friends.