Read all about it! Plans to support local media are widely supported 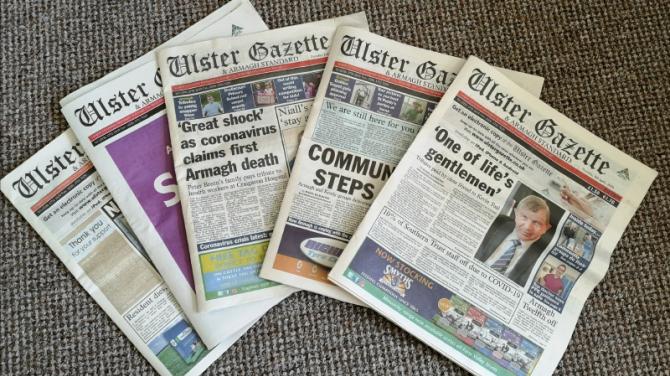 NEW proposals aimed at helping local media outlets in the wake of the COVID-19 crisis have been welcomed by political representatives here.

As well as a rates holiday for local titles, the Northern Ireland Executive should commit to expanding its ad buying across Northern Ireland media, facilitating more daily newspaper delivery for vulnerable groups - while also helping local media plan for the future by expanding their online presence and recruiting new journalists.

Some titles in nearby towns have shut their doors temporarily and there are fears that there is a high risk that this crisis will wipe out a significant chunk of our local news media, as well as the public's ability to hold those in power to account.

Mr O'Toole has asked the Executive to initiate an initial five-point plan:

A one-year rates holiday for local newspapers, subject to a binding promise to reinvest half of savings in either new online products or recruiting new journalists

Allow local papers to apply for grants to invest in new digital products, or digitally upskill their staff

Convene Royal Mail, local newsagents and large retailers, to make newspaper delivery easy and routine – ideally via a single online portal – based on the models developed in the Republic of Ireland with An Post and/or the delivermynewspaper.co.uk portal in Great Britain.

NI Executive to lobby Westminster and Irish Governments to institute a proper digital information levy on companies like Google and Facebook – which continue to profit disproportionately from local journalism - to be redirected towards funding local and community journalism.

His party colleague and Newry and Armagh MLA, Justin McNulty, welcomed the proposals, saying: “The crisis has highlighted the importance of local and regional media in providing accurate, professionally sourced information.

“Whatever the scepticism about some aspects of the national or international media, there are high levels of trust for local and regional media – and people understand that these papers exist to serve and give a voice to their communities.

“With many local titles already furloughing staff or making them redundant, and some have halted printing altogether, there is a high risk that this crisis will wipe out a significant chunk of our local news media. This will have grave implications not just for owners and their staff, but for the resilience of local communities themselves – and the ability of local citizens to hold those in power to account.

“We are facing a crisis in our local media which threatens not just the people who own papers, but the resilience of the local communities they serve. Local and regional papers are not just sources of information – though that is vital – they are the meeting point of people and places. They bind communities together, mitigate against isolation and provide something close to an essential service.

“For that reason the Executive cannot let local papers go to the wall. The SDLP are calling on the Executive to take real action to protect these community assets into the future, and to ensure Northern Ireland trains the professional journalists it needs to allow citizens to hold their leaders to account.”

The DUP's William Irwin was also in agreement. He said: “This is a really difficult time for local print news across Northern Ireland and it is important that every effort is made by our government to make interventions that would help lessen the burden on local newspapers.

“The public relies on their local paper as a means of keeping informed of news and developments and of course many papers have been in print historically for many, many years.

“I would be supportive of any additional measures in these unprecedented times that would help to maintain newspapers and ensure that after this crisis we still have our local news titles operating.”

“This is a serious and precarious situation for all sectors of the economy.

“Sinn Féin recognise the value of local media and are aware of the pressures facing the newspaper industry during this difficult period.

“This issue cuts across a number of Assembly Departments and I have been informed that Ministers will consider all proposals once they receive them.”

“Covid-19 has placed demonstrable pressure on regional, local and community media and it is absolutely essential that the Executive takes action to support local journalists and outlets.”

“This is particularly true in rural areas where they serve right across the Provence,” the UUP Alderman and regular Ulster Gazette reader said.

“They are an essential part of the social interaction of any community and I feel they have got to be preserved and protected in whatever way we can.

“We're going through a very, very difficult time for business and the local press is no different. They reflect the community and attract support from the business community in the form of advertising.

“It's essential that this is protected as we move to the other side of this virus. Our newspapers are an essential part of the social fabric of our community and one that we want to protect.”

And Independent Councillor Paul Berry called on everyone to support their local paper at this time.

“Such local media outlets do offer a real insight into what is happening locally and give many people a real effective voice,” he said.

“They also help keep many people up to date with local events and news stories. Not everyone uses social media such as Facebook so it’s vital these services are protected.

“We can all play our part by even buying the weekly paper or do the online subscriptions to save our papers. All of the employees are local as well and care about local issues so please also help to save jobs as well.”