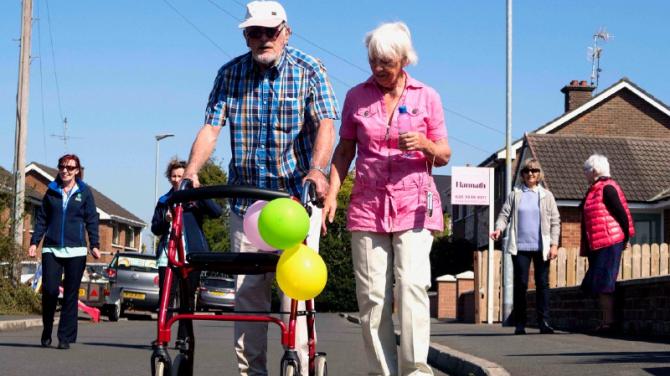 PORTADOWN'S very own version of Captain Tom Moore has raised thousands for the NHS and other good causes by walking around his estate!

Enniscrone Park resident Ken Turner was inspired by the wonderful efforts of the 100-year-old who has raised over £30million for charity.

So, last Saturday, Ken set off around Enniscrone Park cheered on by the residents of the estate.

He had set out to raise £100 but so far Ken has raised over £5,000. What makes his achievements even more remarkable is that Ken suffers from Parkinson's and has had two hip joint replacements.

“I have grandchildren who live in Cornwall and they created a website and put it out on Facebook. Before we knew it we had raised £2,000, which was amazing!

“We're very pleased. I set myself the challenge of raising £100 and getting a pound off every resident who lives in each house.”

Ken said Captain Tom had done well and that he had been inspired by the former Army officer.

“There was only one person who could do that!” he said.

“He was lucky because he had a big house to walk around. I didn't, but it meant that I could have all my neighbours out to support me.

“I had to measure my walk because I suffer from Parkinson’s. I can't talk very well at times and I've had two hip replacements in October, so I've lost my ability to walk.

“In actual fact I've been walking well since I did it. The walk itself wasn't that good – I had to stop for a rest once or twice but people didn't mind that. Everyone in the park came out to watch and observed the two metre rule.”

Ken said his walk had been measured exactly so that those who had donated would not be short changed.

“I walked a kilometre. From my house to the bottom of the cul-de-sac is at least 250 metres, so I walked down it and came back up to make 500 metres. I continued on and turned left down the second cul-de-sac and it turned out to be a little bit short so I went up onto the road and back down.”

He said his neighbours had been “brilliant” with their support and their donations – and that one particular display of generosity had blown him away.

“You couldn't let them down,” he added.

“The highlight of the afternoon was when a wee boy about 10 came over to me and said he had decided to give me his birthday money. It was very generous of the fella.

“I'm a member of a number of clubs and they've all been very generous. The Probus club sent out an email to all of their members and I can't think of any member who hasn't been generous. It would surprise you!

“I have carers who come in so we're going to give some of the money to Ann's Home Care, the NHS, to Craigavon Hospital and to Parkinson's.”

If you would like to donate towards Ken's walk you can do so by visiting https://www.
gofundme.com/f/parkinsons-health-service-and-
carers