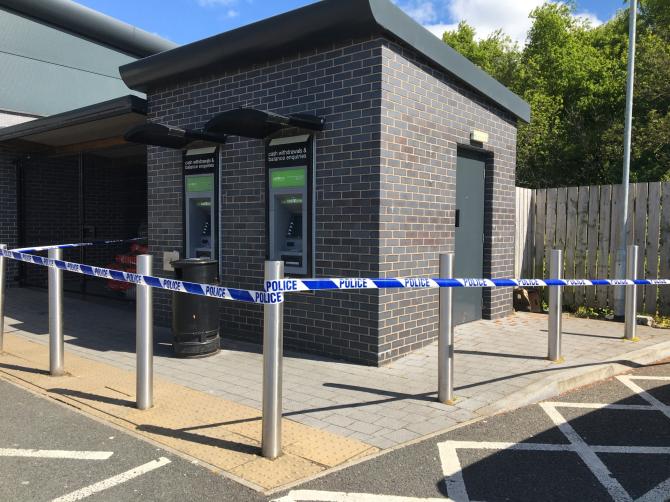 A police corden around the ATM at Fruitfield near Richhill.

THE theft of a significant amount of cash from an ATM at the Fruitfield retail complex on the outskirts of Richhill village has been condemned.

DUP Assemblyman William Irwin MLA and his colleague Alderman Gareth Wilson both appealed for any member of the public who may have witnessed any suspicious activity in the early hours of Wednesday morning to contact the PSNI and assist with their investigations.

Newry & Armagh DUP Assemblyman William Irwin MLA said, “This is a well used and important resource for local people and it is scandalous that such a theft has taken place.

"It is clear that those behind this theft have not been afraid to take some time in breaking into the unit and the cover of darkness and the dense tree foliage has obviously assisted in this process.

"Hopefully those responsible for this criminal act will be brought before the courts and the ATM service can be resumed quickly. Such thefts are sadly not uncommon however this is a well used site and it shows just how brazen these thugs are in carrying out their criminality.”

Commenting Cusher DUP representative Alderman Gareth Wilson stated, “This is a concerning theft where I understand access was gained from the back of the ATM unit housing with brickwork being removed to create an opening.

"I understand a significant sum of cash was stolen in the incident and it appears that the criminals involved made their escape over fields to the rear of the premises. As my colleague has stated hopefully the PSNI can apprehend those behind this outrageous theft.”