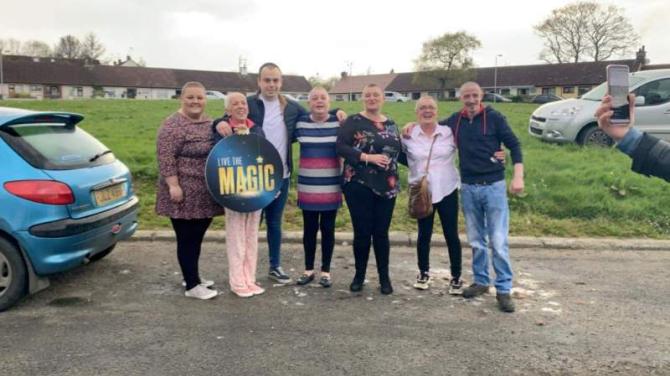 AT the moment many people are having a succession of bad hair days as hairdressers and barbers are shut due to the COVID-19 outbreak.

However, a serious outbreak of bed head has led to many people shaving off their barnets for good causes.

That's exactly what the staff at McGleenan's Centra in Keady have done – and they have raised over £6,000 for their efforts.

The Southern Area Hospice, one of those charities who need donations now more than ever, will be the beneficaries.

Adrian Cassidy, who is one of the managers at the store, explained why he and his colleagues chose to help the Hospice.

“It's one of those charities that everyone has been involved with,” he said.

“We have all been touched by cancer in one way or another or known someone who has needed palliative care, so it's just one of those charities who people come together and support really well.”

The magnificent seven came up with the idea during a chat in work.

“I know it's a cliché to say 'it started as a joke', but it literally did start as a joke!” explained Adrian.

“The women in here are all very conscious of how they look and we always try to get it out there that we are all well presented.

“They were talking one day about what they were going to do with their hair because they weren't going to see a hairdresser for months.

“It could have been me or someone else who suggested that they shave it off and the response was 'no chance'! So then the suggestion came that we should do it for the Hospice, and that was that. That's literally how much organisation it took!

“Fifteen minutes later there were five of us doing it and then a few stragglers came along.”

Shopworkers have been hailed as one of those key workers who have been keeping the country moving and it's a role Adrian and his colleagues are rightly proud of.

“We're very busy,” he said. “It's not something that we want to brag about but everyone is doing their bit and it is appreciated by us.

“Everyone had booked Easter holidays but everyone sort of thought 'what's the point?' and ended up working. Personally I've been working every day – I'm not working full shifts but I'm still actively working every day, taking phone calls and so on.

“The core of it all is serving people's needs. People stopped going to big supermarkets in Armagh and decided to shop local.

“We see it from a business point of view in terms of customer retention, but most of all we want to make sure that people are getting what they want and when they want it.”