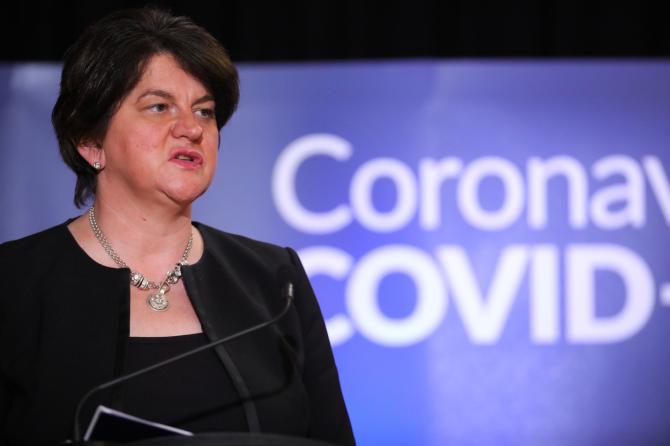 GROUPS of up to six people will be permitted to meet outdoors providing they maintain social distancing, Arlene Foster has announced.

The First Minister announced a raft of relaxations during today's coronavirus briefing at Stormont.

However, the Executive did not agree to allow people to visit immediate family indoors, where social distancing is possible, even though it is included in step one of the pathway to recovery.

It follows the reopening of recycling centres and gardening centres earlier today.

Speaking at the briefing, Mrs Foster said that these had been “important initial steps”

In relation to churches, she said that the lockdown had been “a testing time” for everyone and that people had turned to prayer in their homes as well as online services.

She urged those who were attending churches for prayer and drive-in services to “use common sense” and while the time was not right to open churches Mrs Foster urged people to “be patient”.

The arts had provided “solice and escapism” for many people, she added.

Mrs Foster said while she was pleased to announced that outdoor gatherings of up to six people could take place, she added: "we are not at the time, just yet, to meet family members from other households indoors."

She added, "We understand that is going to disappoint some of you, but we would ask you to remain patient and trust that this executive, informed by the most up-to-date scientific and medical advice is in the best position to guide you when it is safe to do so."

The relaxations will come into force “as soon as regulations permit”, the First Minister said, adding that Health Minister, Robin Swann, hoped to have the amendments to the legislation ready later today.

Meanwhile, the Department of Health reported that there have been a further six coronavirus-related deaths in Northern Ireland.

The death tally in the Armagh, Banbridge and Craigavon Borough now stands at 52, with 479 confirmed cases since the start of the coronavirus outbreak.

In Newry, Mourne and Down there have been 32 deaths with 259 cases.