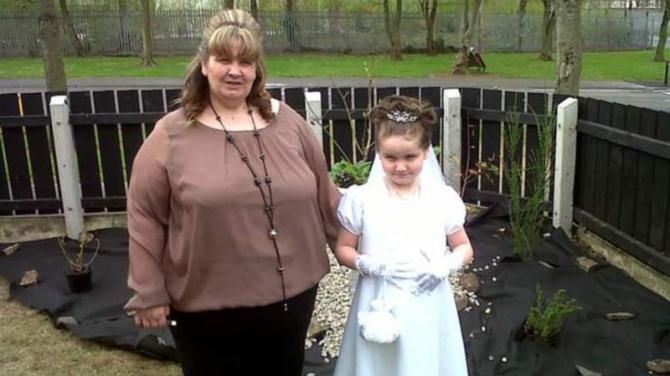 A KIND hearted Armagh schoolgirl has donated her dinner money to help the band of volunteers who came to her grandfather’s aid with essential provisions after his release from hospital.

Becky Lappin, a Year 11 student at St Catherine’s College, was so touched by the kindness of the Armagh COVID-19 Response Committee that she decided to pay it forward.

And, with the backing of the 15-year-old’s mum Orla, the pair set about donating the £27 payment they have been receiving from the Education Board for her dinners to those needing assistance.

Speaking to the Ulster Gazette, Becky’s mum - who has also been providing hand sanitiser from commission made through Avon sales - said the family are so grateful for all the work volunteers have been doing across the city.

It was following a discussion with her daughter Becky - who is studying for her GCSEs next year - that the pair decided to donate the dinner money instead of keeping it.

“When Becky and I spoke about it we sat down and we had a chat and she wanted to know how she could help and I said I wanted to help too,” Orla told the Ulster Gazette.

“I received a payment of £27 from the Education Board and I spoke to Becky and said we could give away your dinner money and she said that would be really good, so we donated that.

“I don’t know anybody who has had to live through times like this before.”

Orla said Becky, a former pupil at the Armstrong Primary, had initially been struggling to adjust to her new way of life after having to give up school earlier than expected due to the coronavirus pandemic.

“Becky would have special needs and she just loves her school,” explained Orla. “She is just very, very unsettled by all of this because she has to have a routine and structure.

“It was a bit strange for her not getting up and going to school and for the first few weeks it was a crying match as she wanted to be at school.

“She has started her GCSEs and she always says she wants to wear the white shirt which essentially means going into Lower and Upper Sixth Year.

“Becky wanted to do something to show her support and I wanted to do the same. Becky’s dinner money comes in every 10 days and I have also started selling Avon online and what I make, I buy bottles of hand sanitiser with my commission and donate it to the COVID-19 team.

“The way I look at it is all summer long we don’t get £27 every 10 days so why accept it now when we don’t get it any other time such as Christmas or Easter holidays.

“There’s no difference with children being off on their summer holidays, except for the fact there is an epidemic going on.

“We have donated twice and I have another payment in which hasn’t been donated yet.”

Orla, a mother of five, revealed Becky is extremely fearful as a result of the coronavirus outbreak.

“Becky is petrified to go out through the door, but we have been trying to get her out for a drive in the car and things like that. She just sits in her room and studies and is looking forward to eventually getting back to school.”

Orla, who lives in the Ardmore area, explained how it was their family’s own encounter with the dedicated volunteers that made them appreciate the essential role the team is playing across the city.

And, after asking for recommendations on social media as to a worthy recipient for the dinner money, everyone was in agreement that there was no better cause than the West Armagh Consortium, which has been instrumental over recent weeks in overseeing the work of the COVID-19 Response Committee.

“What struck me about the West Armagh Consortium and the Response Team was my daddy was taking kidney failure and was in hospital for a few days, but when he came home after an operation, he had to come and stay with us.

“The following morning the West Armagh Consortium arrived at our door with a hamper and that’s what prompted us.

“When people had said about the West Armagh Consortium, I thought after receiving a hamper that would be a really good place to give the money to.

“Also what struck me is how they have all come together, with so many people from different backgrounds all trying to help people out.

“Ireland is a wee island on its own, everybody has their own beliefs but it just shows everybody has come together and it shows it can be done and I just pray to God it stays that way afterwards. A lot of good has come out of this all.

“I would like to thank all the COVID-19 response team for what they are doing in Armagh.

“They have been absolutely fantastic and I can't thank them enough because my daddy still receives a wee food parcel and I just think they are amazing.