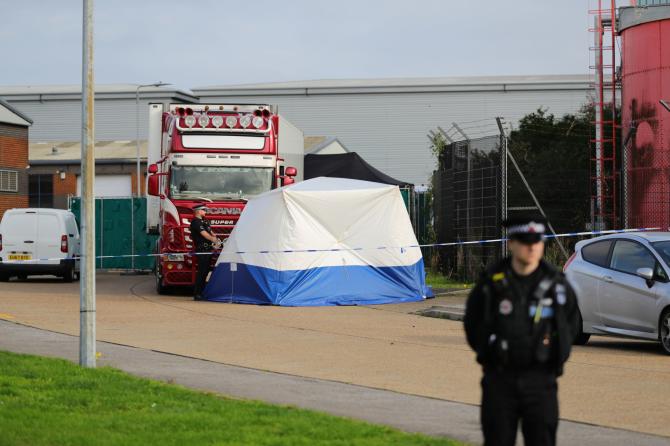 A FRENCH prosecutor has announced that 26 people have been arrested in France and Belgium in connection with the deaths of 39 Vietnamese migrants.

The dead, which included two 15-year-old boys, were found in a refrigerated lorry in Essex last year.

Earlier this year Maurice Robinson (25) from Laurelvale pleaded guilty to the manslaughter of 39 people and conspiracy to assist unlawful immigration and acquiring criminal property.

Meanwhile, Ronan Hughes (40) from Tyholland in Co Monaghan is alleged to have recruited Mr Robinson to drive the trailer in which the 39 migrants died, which was discovered on an industrial estate 32km east of London in October last year.

A statement from the office of Rémy Heitz said that the arrests had taken place simultaneously in Paris and Belgium on Wednesday and were the result of two distinct investigations.

The second investigation added manslaughter to the charges and was opened on March 2, 2020.

“The 13 individuals arrested in France are suspected of participating in a criminal organisation that has lodged and transported several dozen migrants from southeast Asia, particularly Vietnam, on a daily basis for several months,” said the statement from Mr Heitz’s office.

It added that the vast majority of the 13 people detained in France are Vietnamese and French citizens.

The investigation was carried out by officials from the French central office for the repression of illegal immigration and the employment of unauthorised foreigners, known by the acronym OCRIEST.

The investigation was coordinated by Eurojust, with the support of Europol. Investigators from Ireland, Belgium and the UK participated.

Exchanges between regional jurisdictions in Lyon and Lille enabled investigators “to identify the immigration networks that received, lodged and transported the migrants in France before they proceeded to Great Britain, as early as November 2019,” the prosecutor’s statement said.