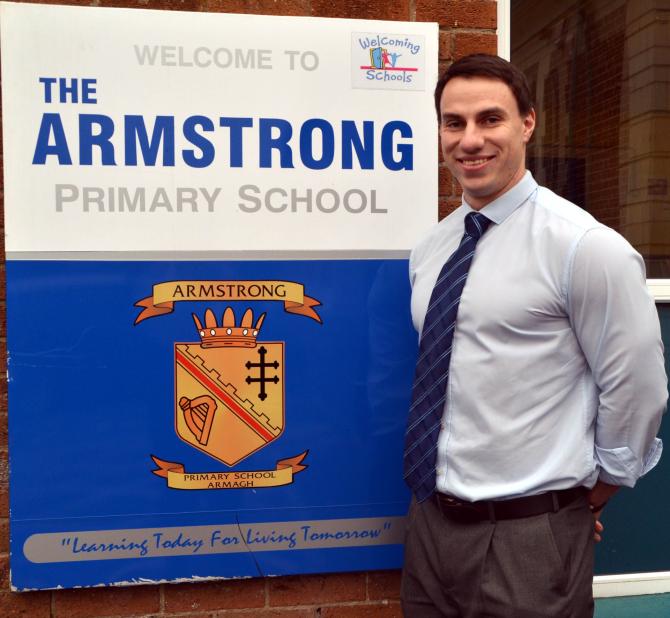 Stephen Forbes will be heading to the Commonwealth Games

Armstrong Primary School P6 teacher, Stephen Forbes will fly out to Australia’s Gold Coast on March 26 as part of a four-person weightlifting team. It is the first time since 2002 that Northern Ireland has sent a weightlifting team to the Games and Stephen is delighted to be on the plane.

“I was ecstatic when the team was announced on January 3,” said Stephen. “I was confident that I would make the squad but you can never be really sure until the official announcement is made.”

When Stephen touches down in Australia it will be the culmination of months of hard work which has helped him not only meet the required standards to qualify for the Games but also to come back from a serious injury which had stacked the odds of being selected against him.

“In weightlifting competitors take part in two disciplines, the snatch and the clean jerk and the combined totals of the best two lifts are registered,” said Stephen. “I qualified with a total of 280kg and i’ll be hoping to improve on that in Australia.”

Stephen is reasonably new to the sport having made his name on the hockey pitch, playing for Banbridge firsts for over a decade.

“I played hockey for Banbridge from P6 until I was 25 years old. For the final 10 years of that time I played for Banbridge firsts,” said Stephen. “In the summer of 2013 I tried Crossfit in Newry and began lifting weights and really enjoyed it.

“I decided to take a break from hockey and to start competing at weightlifting. I am 29 years old now so I have been competing for the past three years.”

Stephen, who now lives in Belfast, trains out of the Reebok Crossfit NI gym and his coach is Rathfriland man, Timmy Graham.

“Timmy has been great for me, we have been working together in Belfast or at his Rathfriland gym, the Strength Farm, for the past four years and it’s great that he will also be on the plane to Australia as my coach.”

In July 2016 any dreams Stephen had of competing at the Games seemed to have been shattered when he injured his shoulder. The injury required surgery which took place in October 2016 and his rehab continued through to January 2017.

However under the guidance of Timmy, Stephen was able to get back to full fitness a lot faster than he anticipated but it has taken a lot of hard work and dedication.

“Each day I will be in the gym at 5.30am for an hour and a half training session.

“After this I travel down to Armagh for work and then in the evening I will be back in the gym for another two hours.”

To be selected for the Commonwealth Games athletes must be ranked in the top 14 in their weight class to be selected. In October 2017 Stephen met the qualifying standard and from that point he has been confident of selection by the Northern Ireland team.

“It has taken a lot of hard work but I have also had great support from my wife, Emma who has been very understanding when it comes to the early morning and late night training sessions,” said Stephen.

“David Dickson at the Armstrong has also been very supportive and when the team was announced he told the children during asembly which was lovely. The pupils have been brilliant and lots of them were coming up to me to congratulate me.”