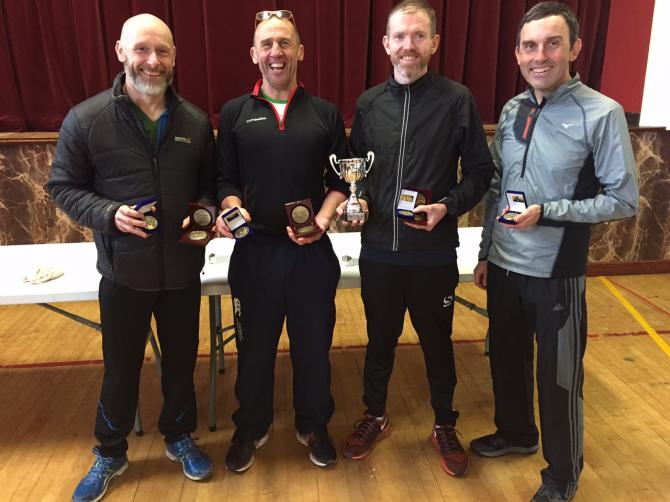 DESPITE  the attractions of a multiplicity of races including various mountain races the turnout of 42 athletes while less than recent years wasn't too bad in the circumstances.

Conditions following the snow and rain of recent weeks made conditions even more difficult than usual so the course records were never going to be challenged.

As usual everyone stayed together on the fast initial track leading to the heather and bog where the real race starts and route choices are made that can often decide the outcome of the race.

While the lower slopes had reasonable visibility the higher slopes were shrouded in dense mist.

Despite the problems of visibility no one went seriously astray this year.

The determined front running of Maurice Harte Newry AC and Lorcan Quinn Newcastle took them clear of the chasing bunch led by Lorcan Vallely Armagh 3rd at the South Cairn.

The two leaders maintained their lead while 3rd placed Lorcan Vallely dropped back 7th or 8th and the running was taken up by Stephen McNally of Newcastle. However after the critical 3rd checkpoint at the North cairn and the start of the descent route choices took over and while McNally went one way the rest of the chasing bunch went straight down.

Once on the very runnable track coming out of the heather Vallely quickly regained his 3rd position which he held to the line with a trio of Newry AC athletes Warren Cartmill, Esther Dickson and Paul Le Blanc battling out for 4th, 5th and 6th positions.
Stephen McNally came in another 4 seconds back with Paul Hollywood Armagh's second finisher another 20 seconds in 8th.

The outstanding performance of the day had to be that of Esther Dickson who recorded a brilliant sub 40 time of 38.08 to convincingly win the women's race as well as beating most of the men. In not ideal conditions her time has to be among the best women's times recorded - Fiona Maxwell's record time of 37.23 established in 2007 and Karen Alexander's 2009 time of 37.53 are now joined by Heather's 38.08.

Thanks to the marshals Gerard Hughes, Brian Finnegan and Ollin Finnegan who did a great job in difficult conditions. Entries, Time keeping and results were looked after by James and Brian Vallely. Margaret and Padraig Muldoon served the tea and sandwiches and kept everyone happy at the presentations presided over by Ricky Cowan.