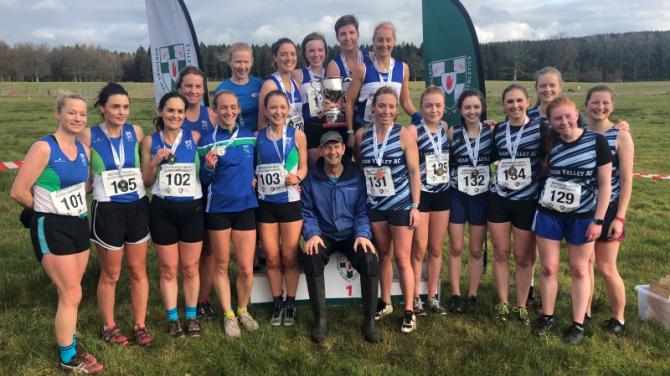 THE women’s 3K at this Thursday’s (February 13) 30th Armagh International Road Race got a significant boost this week with national teams declared from Scotland, Wales and Ulster/NI, as well as many more top individuals, making this year’s event possibly the greatest indepth women’s race to date.

The Ulster team includes Rachel Gibson from North Down who has run 9.33 for 3K and 4.32 for 1500m. She'll be joined by Laura Graham from Mourne Runners who has a 3K best of 9.47, Sarah Lavery Beechmount Harriers with a 3K best of 9.53 and finally Nakita Burke from Letterkenny AC who has a 10K best of 34.08. This is a very strong team and it will be interesting to see how they fare against the other national selections.

Fionnuala Ross of Armagh AC was shortlisted for this but will be running in an International Half Marathon in Portugal that week so unfortunately we won't see her in Armagh.

The Ulster men’s team is led by Ryan Forsyth the Californian based Newcastle AC runner who is coming into the race with the best time on paper having recorded a brilliant 13.38 last year in the States. He’ll be supported by Neil Johnston of the Springwell Club who has recorded 14.26 for 5K, Ben Branagh of St Malachy’s AC with a best of 14.16 and Patrick McNiff of Banbridge AC who has a best of 14.40 for the distance.

Scotland as usual has entered very strong selections in both the Women’s 3K and the Men’s 5K. The team includes Kerry MacAngus from Kilbarchan AC who has  a 3K best of 9.23, Annabel Simpson of Fife AC a 9.26 performer, Cera Gemmel of East Lothian Ac with a 9.32 PB for 3K and finally Jenny Selman also from Fife Ac with a best of 9.42.

The Scottish men’s team is also a powerful squad and includes Jamie Crowe from Central AC who has recorded 14.21 for 5K, James Donald of Dundee-Hawkhill with a best of 14.23, Cameron Strachan of Metro Aberdeen with 14.00 and finally Michael Christoforu from Enfield & Harringey on 14.41.

The Armagh Road Race has had a long standing connection with Welsh athletics through the decades long exchanges with Swansea Harriers who will be represented this year again both as a club and in the Welsh national team. Dewi Griffiths is no stranger to Armagh and on one of his trips here he recorded 13.58 while he has a track best for 5000M of 13.33.

He has many times represented GB in international competition and despite having had a few set backs last year comes to Armagh as a real contender for top honours. He’ll be joined by Swansea Harriers clubmate Jonathan Hopkins who has a 5K best of 13.57, James Hunt of Cardiff AC on 14.37 and Matthew Willis of Wrexham who has a best of 14.28.

The Welsh women’s team is led by Charlotte Arter of Cardiff AC who has run before in Armagh and has perhaps the best 3K time coming into the race with a PB last year of 9.02 which is not all that far off the course record.

Charlotte is definitely a runner to watch out for on the 13th February. The other three Welsh women are Cari Hughes of Swansea Harriers a 1500M runner with a best of 4.25, Beth Kidger of Brighton Phoenix with a 9.24 best time and Bronwen Owen of Leeds City AC with a PB of 9.27.

In addition to the national teams lining up next month for the 30th Armagh International Race there are many top athletes entered who didn’t make their national teams. These include runners like Petros Surafel of Real Runners who has run here before and has a PB of 13.58 for 5K, Liam Brady of Tullamore Harriers who is the current All Ireland Senior Cross Country Champion, Lucien Allison of Lincoln Wellington AC who has a 5K time of 13.57 to his credit.

In the women’s race, a local athlete to watch out for will be Emma Mitchell of Queen’s University who has a season’s best of 9.24 which definitely puts her in serious contention for a podium spot.

RECORD ENTRIES FOR THE JUNIOR RACES

Entries have been pouring in for the junior/juvenile races and we can expect some great races on the night.

The Armagh AC junior/juvenile section of the club has seen a great resurgence in recent years and this is already being reflected in results week on week at cross country, track and field, as well as indoor competition. These young athletes are the future of the club and some of them will undoubtedly emerge into the senior ranks in years to come.