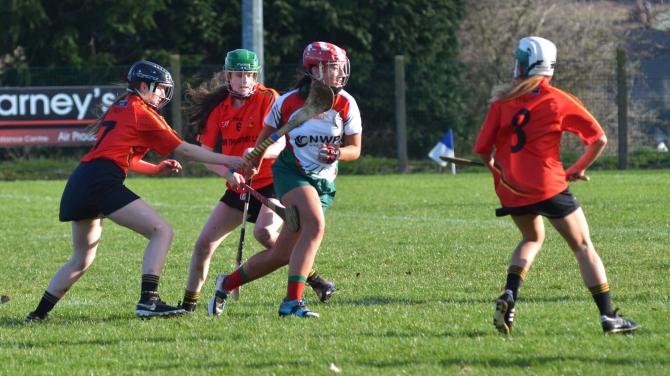 ATTLING: St Catherine’s Caoimhe Donnelly gets through the opposition defence.

ST  Catherine’s College fought hard but their dreams of an All Ireland final were dashed by a deserved victory for Limerick side John the Baptist Community School at Abbey Park on Friday afternoon.

The visitors had made a very long journey from the small town of Hospital which lies between Charleville and Tipperary but went home happy on the back of a 13-point triumph, though their third goal in injury-time made it a very harsh scoreline for the Armagh girls. Although St Catherine’s were comfortably beaten on the scoreboard, they can hold their heads high on the back of a first Ulster success at this level for almost three decades and a spirited performance here even when the big game was long gone.

The local team trailed by seven at the interval after failing to curtail Limerick raids in the opening period but turned around with hope as they would be facing down the hill with the wind behind them in the second half and could draw inspiration from their magnificent comeback in the Ulster final. Unfortunately the expected dividend didn’t materialise, the St Catherine’s cause not being helped by the wind dropping a bit or the third quarter ankle injury which greatly restricted captain and star forward Leanne Donnelly, scorer of all but one of her team’s points.

Leanne’s evident discomfort contributed to her hitting a couple of frees wide which she would have expected to convert and also limited the Eglish star to deployment on the edge of the square by big sister Ciara, the St Catherine’s coach. A fully fit Donnelly would undoubtedly have got in the game more by dropping deeper but became a frustrated spectator at times in what will now prove her last ever match for St Catherine’s, a school she has served with such distinction. Cullyhanna’s Caella Casey, who like Leanne Donnelly has played for Ulster at adult level, did a good job in averting danger at full back but that left a lot of field between the two Armagh regulars in this St Catherine’s side.

Incisive individual attacks by the Hospital school were a significant feature of the first half as a range of players showed their techique, confidence and awareness in finding the space to make eye-catching carries into the scoring zone. By contrast, promising St Catherine’s attacks all too often broke down so, although the visiting side didn’t dominate emphatically or in all facets of play, they were able to begin building a healthy lead. St Catherine’s had the first chance when Casey Mullan of St Bridgid’s drilled low at the keeper after Port Mor’s Orla O’Kane outmuscled an opponent to win possession back from the throw-in but a very long free from wide on the left gave Limerick an early lead they would never lose. Convie won the puck out but the team in red doubled their lead with a second free and the first goal came in the seventh minute when wing forward Sinead McElligott made one of those probing runs and St Catherine’s couldn’t snuff out the danger. Leanne Donnelly, who had lifted the Ulster trophy on her 18th birthday before Christmas, lashed over a free to get St Catherine’s on the scoreboard two minutes later at the start of a good spell for the city team.

Crossmaglen’s Faye Fitzpatrick was almost through and then Eglish’s Catherine Muldoon showed why she is an Ulster Schools All Star with an excellent clean catch out on the left before shaking off several defenders and driving over a superb point. John the Baptist’s were awarded a disputed point and quickly added another score which just skimmed over the bar before Leanne Donnelly made amends for a wide by converting a free from long range. Aislinn McMahon, a talented dual player from Crossmaglen, made three surging runs down the left and although her first ball in was easily picked off, the next two resulted in threatening goalmouth scrambles.

Unfortunately nothing came of them and, although Leanne Donnelly completed her hat-trick of frees, Anna Rose Kennedy became the second wing forward from Hospital to find the St Catherine’s net after a long run. St Catherine’s responded with a storming run and point from play by captain Donnelly but the Limerick lot got the last two scores of the opening period courtesy of a 45 and a free to make it 0-5 to 2-6 at the break. The Armagh girls, who stayed out on the field throughout half-time unlike the visitors, would have hoped to make a fast start to the second half but Limerick got the opening point within two minutes of the resumption.

Promising dual player Mullan had a low shot just past the near post after doing well to create the opening and a sustained spell of pressure from St Catherine’s sadly went without reward on the scoreboard. Injured in the course of a brilliant run, Donnelly was wide with two dead ball efforts and then Hospital had their own promising period without anything to show for it though, unlike St Catherine’s, the ticking clock was their friend. A longish free finally gave John the Baptist’s the first score by either team for 22 minutes and they added another to leave St Catherine’s a full three goals adrift with less than four minutes remaining.

Muldoon’s superb block at point-blank range kept Hospital pinned back and Leanne Donnelly drilled a shot inches over the bar on the turn but the Limerick crew cancelled that score out in the last minute of normal time after a great team attack. Salt was rubbed in the wounds in injury-time when Mullan gave away a free for reacting to being fouled and the Munster third tier champions swept downfield for a crowning goal by McElligott. Her sibling Leanne and Casey will be hard to replace but their hungry young coach Ciara Donnelly can look forward to putting out a very competitive team next season featuring most of those who lined out on Friday and will have benefited from the experience gained over the past few months.

“I’m disappointed for the girls as I don’t think the scoreline reflected the match or their efforts but our opponents were a bit too physical for us and we just couldn’t get the scores. But they’ve had a good run and the school can be proud of their achievement this season,” reflected Ciara.