Second half goals Tipp the balance 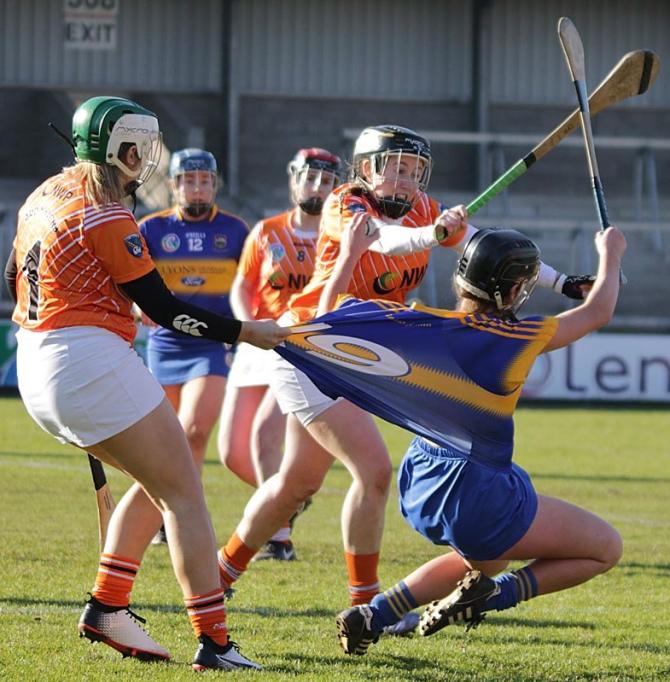 TIPPERARY  Seconds left the Athletic Grounds with the win points on Sunday but young Orchard camogie captain Leah McGoldrick has vowed that Armagh will learn and benefit from every experience in this season’s Littlewoods National League.
Victory over opponents from Ireland’s hurling heartland proved beyond Armagh, though as against Derry seven days earlier, this largely young Orchard outfit provided promising glimpses of what they can become.Handed the honour of officially leading her county at adult level for the first time at the age of just 19, Madden’s McGoldrick was characteristically honest in assessing Armagh’s performance and typically positive in summing up the Orchard outlook after two defeats so far in NCL Division Two.

“I suppose there are feelings of frustration in that we were going quite well but those couple of goals in the second half killed us. We showed we can compete though and some of the girls can be very pleased with their personal performance,” reflected Leah.

“It’s always a real honour to captain your county at any level, especially in the Athletic Grounds, but you want to win or at least lead by example and set the standard, so I wasn’t that happy with my own first half performance for I felt it wasn’t great.

“The second went a bit better and the important thing for us as a team is that we always look to learn and keep pushing upwards. Our average age has dropped a bit this season but the hunger is there and we want to improve in everything we do.

“We’ve a lot to work on but there have been real positives to take from the two matches so far so that’s something for us to build on. Wins would have been nicer but, at the stage we’re at, every experience should stand to us come championship time.

“When new management come in there’s a fresh feel to things and no doubt they’re learning about us every time we take the field and even each training session. We’re under no illusions about the hard work which will be needed but I think if we keep putting that in the rewards will come,” insists the no-nonsense defender who doubles up as an Ulster rugby player.

McGoldrick had earned praise for how she stood up at the back against Ulster champions Derry in the opening game when, as always, Armagh had looked to the exceptional Ciara Donnelly for scores and inspiration.Here too the Eglish star typically led the way with half of Armagh’s 1-13, seven of her eight points coming from frees, while her sibling Leanne also weighed in with one point in the second half.

Ballymacnab’s Eimear Smyth got the Armagh goal and a couple of points with the other two scores coming from Granemore forward Rachael Merry, one of them in either half.Donnelly’s first two frees each brought Armagh level after Aoife McLoughney had given the Tipp second string the lead with a 45 and then a free, but the visitors then got three scores in a row before Merry’s first for the hosts.

Tipp pointed again before Eimear Smyth raised a white flag and her goal in the last minute of the half was badly needed for in between the Orchard’s opponents had rattled off five points in a row to lead by seven.Ciara Donnelly halved the four-point interval deficit with a free and a score from play inside the first six minutes after the resumption but, by the time she got her next free, Tipp had hit a further 1-1 at the other end.

A second goal from McLoughney was a big blow for Armagh but they pulled it back point by point courtesy of another free from Ciara sandwiched between both Merry and her own sister Leanne pointing from play. McLoughney and Ciara Donnelly, the latter courtesy of a free, again exchanged scores before the visitors killed off any Orchard hopes of salvaging victory with their third goal.Eibhlis McDonald put over a free to make it 3-14 to 1-11 before Ballymacnab’s Smyth and Ciara Donnelly, from play and through a free respectively, scored to leave the final margin of Tipp’s victory at seven points.

This Sunday, Armagh must travel to take on newly-promoted Dublin Seconds, who have been drawn in the same All Ireland Premier Junior Championship group as Sean Paul and John McKillop’s Orchard team and Roscommon.