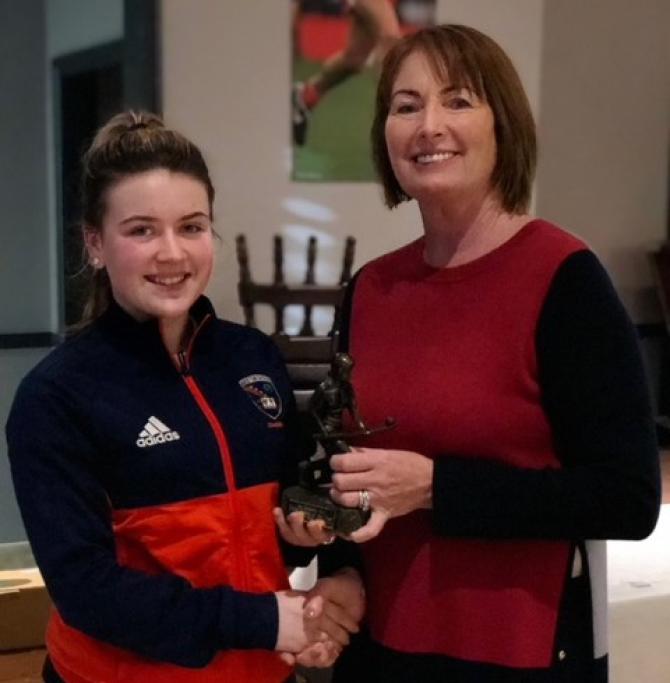 Kathleen Woods presents Jessica Hamill with U16 Player of the Year

ST BRIGID’S  Camogie club Armagh recently celebrated the success of their Under 16 side last year who captured the County Under 16 championship.

They did so after a comprehensive win against Ballymacnab in the semi-final to bring them to an exciting final against old rivals, Keady, where they captured the title for the first time ever.

Held in the newly refurbished Armagh Harps GAA club, the club enjoyed the presence of Mrs Kathleen Woods, who in a matter of weeks will be installed as Armagh’s first All Ireland Camogie President.

Kathleen congratulated the St Brigid’s girls on this success and praised them for their skills and determination on the field. She acknowledged the superb work put in by their coaches and management and encouraged them to continue to build on their success to date.

Jackie Donnelly was singled out for her contribution to the success of these players as lead coach and her passion and commitment to the players and the St Brigid’s club in general.

The club is also reflecting on the fact that it is 50 years since the underage club, named St Brigid’s, was formed to go alongside the senior team which had existed in the city for years previously. It is hoped to hold several events during the year to mark and celebrate this achievement.

Kathleen Woods presented the Under 16 championship cup to joint captains Alana McCreesh and Jessica Hamill and all the girls received their beautiful County medals.

Awards were made to the five girls who played on the county Under 16 side who went on to achieve All Ireland honours, namely Jessica Hamill. Alana McCreesh, Caoimhe Donnelly, Casey Mullan and Ellen Lavery.

The Player of the Year at Under 16 level was Jessica Hamill, who was a driving force at midfield and a player who could snatch crucial scores when most needed. The award for Most Improved player went to Louise Neeson, who made great progress and has  grown in confidence, as could be seen in her play during the year.

A presentation was made to Mrs Kathleen Woods on behalf of the club and good wishes were extended to her as she begins her All Ireland role.