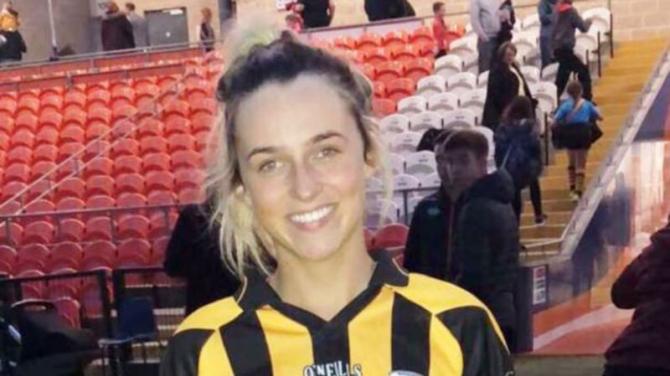 CROSSMAGLEN are just 60 minutes of camogie away from another trophy triumph but livewire attacker Megan O’Callaghan says she’d happily have taken a longer journey to this Sunday’s Ulster Junior B final.

A variety of factors including the confusing structures of the multi-layered Ulster camogie club championships mean Crossmaglen go into this weekend’s showdown as the only game of their provincial campaign.So Crossmaglen meet Monaghan neighbours Clontibret (2.30pm) at a venue yet to be announced – Castleblaney has been cited as logical geographically – on the back of a big gap since beating St Brigid’s in the Armagh Intermediate decider on August 31.

“We’re very excited to be preparing for an Ulster final, though it has felt strange going from one final to another without having to win any more matches,” muses O’Callaghan, who won Player of the Match against St Brigid’s.

“To be honest I’d have preferred earlier rounds as the best way to maintain momentum, but all the girls have been very committed to training over the past few weeks so we can hopefully hit the ground running next Sunday.

“I think we played Clontibret in a league game one year and maybe beat them but I can’t remember much about that and facing different teams is part of the excitement of playing in the Ulster club championships.“When we won the Armagh Junior title last season we were all ready for a provincial campaign but because other teams moved down a level there was no grade for us to compete in which was very disappointing.”

By winning the Armagh Intermediate title at the first attempt, Cross have wasted no time earning themselves another chance to play provincial camogie and claiming Ulster silverware would round off a great 12 months or so for their numerous dual players like O’Callaghan.

“I’m very proud that next year we’ll be the only club in Armagh playing Senior Championship in both female codes and that reflects the hard work which has been done by the players and two very committed management teams.

“Before Peter McMahon and Maria O’Donnell stepped in, our ladies football team was in danger of folding while in camogie Micheal Murphy has really brought us on as players and taken the team to Junior and Intermediate titles two years running.”

The Crossmaglen men’s outstanding success in gaelic football over the past couple of decades was sustained by bringing through promising prospects on a regular basis and O’Callaghan is excited with the female talent emerging in the club at present.

“I’m still only 19 myself but there are even younger girls making a big impression in both codes over the past couple of seasons and playing major roles in our success, the likes of Aislinn McMahon and Faye Fitzpatrick.”

Although largely young, these Cross sides don’t lack confidence or tenacity and O’Callaghan is proud of how hard they fought for those Intermediate titles in both codes.

We were underdogs against Sarsfields in the football final last season but came through that after a replay and then this year we wouldn’t have been expected to win the camogie Intermediate in our first season up.“But what matters is that we had belief in ourselves, though it took a good chat at half-time followed by a few scores and subs making an impact to get past Derrymacash in the quarter-final.

“It was a real hard derby battle against Cullyhanna in the semis – there’s never much love lost between neighbours in sport! – and we took confidence from beating an established team containing a top player like Bernie Murray.“It was special that the final was in the Athletic Grounds and nice from a personal point of view to get Player of the Match though that could have easily gone to Aislinn or Aveen (Donaldson) and just winning was everything.

“From having gone to school at St Catherine’s, I knew how good a lot of the St Brigid’s girls are but we started strongly and I was pleased with my own first half performance,” reflects Megan, who got the Crossmaglen goal.Along with the experienced Donaldson sisters, Aveen and the club’s camogie captain Orla, Crossmaglen will look to the fleet-footed O’Callaghan for inspiration this Sunday and she will relish the challenge.

A useful footballer for Armagh Minors who will hopefully wear the orange jersey at senior level in that code in the not too distant future, the talented teenager has the attacking capacity to prove a real handful for Clontibret camogs.