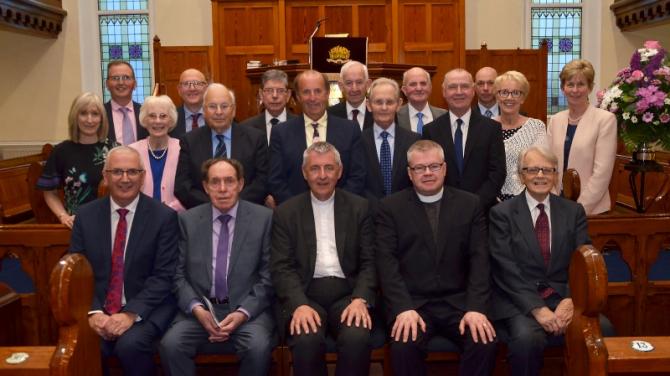 Clerk of Session Danny Kennedy, who had stepped away briefly from campaigning in the European Election to take part in the service, said it had been a wonderful event for the Bessbrook congregation.

He said he was delighted that many former members had returned “home” to be part of the occasion and the congregation had included representatives from all of the other local Churches in the village.

Mr Kennedy said he was very pleased that the Senior Minister of the congregation, Rev Robert Nixon (who ministered 1972-1998) was present, as well as Mr Ronald Carser, son of Rev Hugh Sidney Carser (1936-1971), whose ministry is still fondly remembered in the village.

Mr Kennedy recalled the dark days of The Troubles, particularly the Kingsmills Massacre, when seven of the 10 victims were Presbyterians, and six coffins had rested in the Bessbrook Meeting House at the funeral service in January 1976.

He said the impact of Kingmills was still felt today in the congregation, but people were heartened and encouraged at the refurbishment project and the very special service of re-opening and dedication conducted by the Moderator, Right Rev Dr Charles McMullen and the Bessbrook minister, Rev Keith McIntyre.