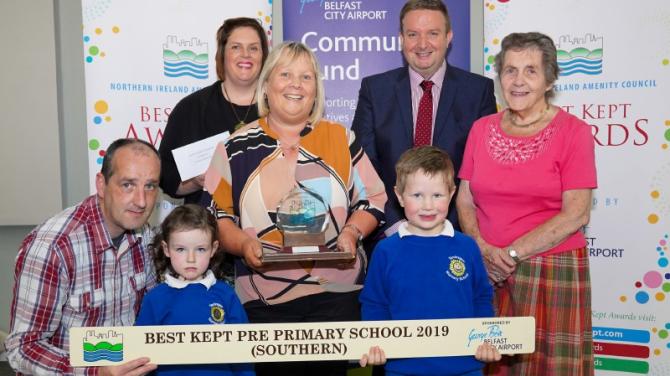 TANDRAGEE Nursery School has been named the ‘Best Kept School’ for the Southern region at the annual Best Kept School Awards in association with George Best Belfast City Airport.

The school was praised for its commitment to the creation of an environmentally conscious school community, in addition to outdoor eco-activities, to promote student awareness and wellbeing,

Tandragee also involved local groups in the creation of outdoor space where all students can learn and work together.

There was also success for Cortamlet Primary School, who won the Best Kept School Award for Primary Schools in the Southern Region. Orchard County Primary School in Annaghmore were runners-up in this category.

Doreen Muskett, President of the Northern Ireland Amenity Council (NIAC) who host the awards, commented, “The standard of applications continues to rise each year, with a notable amount of schools being placed that have never entered the competition before. Our judges had a tough time choosing the winner!

“Tandragee Nursery School impressed the judges with their demonstration of school community values and their role in sustainable education.

“The Best Kept School Awards is a great chance for schools to demonstrate their commitment to the environment and sustainability, equip their pupils for with practical skills for the future and show Northern Ireland the tremendous work that happens behind the scenes every day.”

Stephen Patton, CR and HR Manager at Belfast City Airport, presented Tandragee Nursery School with its prize at a ceremonious event at Stranmillis University, in Belfast. He commented: “It was fantastic to see over 120 representatives from local schools and education boards attending the Best Kept Awards today. Congratulations to Tandragee and each school that won in its category.”

The Best Kept School Awards is part of the wider Northern Ireland Best Kept Awards initiative, with the Best Kept Health and Social Care Facility Awards taking place in September and the Best Kept Towns and Villages announced in October.