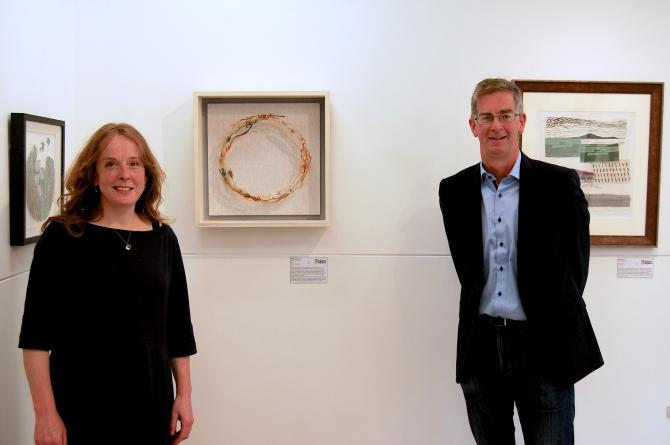 An ethereal piece of sculpted glass which embodies the observations of its maker as she took her daily exercise along the North Antrim coast during lockdown has been named the winner of Craft NI’s ‘Unlocked’ exhibition.

Andrea Spencer’s piece of work, entitled ‘Return’, was inspired by nature and the natural materials she found along the shoreline close to her Ballintoy home.

The 'Unlocked' exhibition is one of the highlights of this year’s August Craft Month. It is open to the public throughout August and September at Craft NI’s gallery on Royal Avenue, Belfast.

Craft NI has commissioned a film celebrating the craft pieces which were submitted to the Unlocked exhibition. Craft makers were invited to submit pieces of work which were inspired by the lockdown period.

Craft NI Director, Katherine McDonald said the exhibition has been a great platform to showcase the level of expertise within Northern Ireland’s craft community.

She said: “The work is exceptional, and I have greatly enjoyed viewing the pieces at our gallery. I would encourage anyone to come along and view them but if that is not possible you can watch the film on our website.

“A lot of our programme this year has moved online due to the restrictions, but we have viewed this as an opportunity to promote the work that goes on in Northern Ireland to an international audience.

“We have held webinars with leading figures in the craft world, along with studio tours with some amazing local makers, overall, August Craft Month has been very successful. Many of our videos, webinars and studio tours are still available online for people to enjoy for the rest of August and beyond.

August Craft Month is coordinated by Craft NI on behalf of the craft sector and funded by the Arts Council of Northern Ireland.

Suzanne Lyle, Head of Visual Arts, the Arts Council of Northern Ireland, said: “The Arts Council is delighted to support this wonderful celebration of craft, which offers an important platform to showcase the talent of our local craft makers, bringing great art to all.

“The work from our makers in the exhibition has been excellent and a real joy to see.”

Speaking about her inspiration for ‘Return’ and the impact lockdown had on her studio, Andrea said: “For my practise, this meant an immediate cessation to the supply of compressed bottled oxygen, the fuel source essential to operating the bench torch that I use to create my flameworked glass pieces.

“This seemed an uncanny metaphor for what was happening around the world, people with severe symptoms of Coronavirus, unable to breathe, literally gasping for breath.”

Andrea was able to borrow equipment which allowed her to sustain a level of practise throughout the height of the lockdown and complete her piece of work for the exhibition.

Exhibition judge, Audrey Whitty who is Head of Collections and Learning at National Museum of Ireland (NMI) described Andrea Spencer's work as ‘stunning’.

Audrey said: “The combination of glass and mixed media in Andrea Spencer’s Return is refreshingly honest in its execution of the fragile with the robust, thereby reflecting what in essence the pandemic implies, i.e. the fragility of human life, but the strength of our resolve and communal effort to confront and ultimately triumph.

“Return is an expression of the human need for oxygen at a time when rather ironically the world is affected by the ravages of a disease in its targeting of the lungs.”

The film features all the submitted pieces of work including:

Natasha Rollinson, ‘Unlocked/Locked’: Natasha created an interlocking ring set which unites to frame nature’s most valuable gem with a halo of golden sunshine.

Celine Traynor, ‘Counting Days’: Natasha made a pendant and earring set in silver and gold depicting tally marks. They represent a countdown to a better time in our future and have been made poignant by our present.

Egle Banyte, Curious Construction No. 9: Egle created a 32-segment necklace which represents the unlocking of the circular form. It is joined using fragile hinges. The necklace is unlocked by the wearer and how the hinge piece sits also depends on the wearer.

Patrick Colhoun, Barbed Wire Fence: Patrick’s piece used hardwood salvaged from his late father’s workshop. The lockdown gave him time to evaluate lots of things which would not be possible without his ability to work with clay.

Irene McBride, Escape from Lockdown: Irene painted a stained-glass panel inspired by a photo she took at St Dunstan’s in the East, London. It expresses how she felt during lockdown and her desire to escape.

You can view the Unlocked exhibition film at Craft NI’s website where you can also watch the webinar series hosted by well known BBC broadcaster, Marie-Louise Muir. You can also watch the Studio Tour films which give a glimpse into the processes and inspirations for a number of local makers.